redecoffee wrote:Did you ever find noticeable imbalance when using only one?

Nah, I used to think this would be a thing before had panniers, it isn't. I've had the odd stupidly imbalanced load before (i.e. more than the rated 25kg rack limit on one side) and you do start to notice then that you're naturally leaning the bike the other way a little but it doesn't cause handling problems.

Main problems with heavy loads on the rear only (lopsided or not) are inadvertent wheelies on steeper hills/too much power and careless dismounted handling.
Top

mattsccm wrote:Carradice used to make a big tall saddle bag that mounted high o a SQR mount. Any idea what it was? No idea what. Gets all my clothes, lunch, odds and sods and a few books in it.
Edited. This one. Big enough for some A4 files or a classes worth of marking.

They do an SQR Tour and SQR Slim. I think the latter resembles what you're referring to. It's not as tall as the Tour version but is wider, so good for thin, wide items like A4 files.

I use the Tour version for commuting, swallows laptop and all the paraphernalia with ease. Though I usually leave laptop at work.
Last edited by Cyclewala on 14 Jan 2021, 3:35pm, edited 1 time in total.
Top

I have normally used a rack pack with zip-out pannier things. that can hang down the rack. I can generally carry what I need in the rack pack, and still stop and pick up something at the shops if I need to, using the zip-out sides.

I do need to take panniers if I need to carry a laptop. One pannier is not a problem, even fairly well loaded.

My work location has changed, so when I am back in the office (currently work from home), I will need to change my commuting habits. I am currently thinking I will walk + bus, but I will have to see how reliable that is. The next most convenient alternative is folding bike + train.
“In some ways, it is easier to be a dissident, for then one is without responsibility.”
― Nelson Mandela, Long Walk to Freedom
Top

The Fusion Pannier was a full size pannier, made out of a waterproof, reinforced plastic material and was waterproof. I don’t know why they stopped making them. I also have a set of Ortlieb Back Rollers but I’ve found that they don’t hold their shape very well when half full, so never used them for commuting, whereas the Fusion kept its shape well, irrespective of contents.

Here’s a picture of the Fusion on Amazon, but it’s unavailable.

A single pannier is ideal for commuting. For many years, I used Karrimor panniers. It is amazing how long a pair lasts, when only using one. Unfortunately, my last pair out lasted the company.

I find a side pocket essential, and my current pannier lacks one. Somewhere to dump those small items, like lights, gloves (light weight, for winter), small notebook, pen, etc. But more importantly, being able to retrieve things quickly instead of rummaging around the bottom of the pannier to try to find your back light, or second glove. Very frustrating.

Not willing to compromise on that a second time, but the Altura Night Vision (no longer available, I see) has not lasted well, and I don't think I can keep patching it any longer. Within 2 years it had holes along the bottom edge, now all the bottom edge is gone. Putting the D lock in it might not have helped (but the Karrimore didn't develop holes). It would be OK for touring (not around the world), but not regular utility use.

Carradice are made of similar material to the old Karrimors. They also come with a partial plastic backing to reduce rubbing against the rack. Inside, the pannier base is lined with corrugated plastic board to avoid things wearing through.

I used a pair for commuting for about 3 years and couple of short tours. I found the outside base was starting to show signs of wear (abrasion against concrete floors) so riveted some corrugated plastic (estate agent sign) to it and painted it black. So, now I have protection against all the key wear points and I reckon they'll last me decades.

In my experience, panniers wear along the bottom either through abrasion outside or sharp/heavy objects wearing from the inside. On my other panniers (Vaude and basic Halfords canvas) I have stuck linoleum to the base outside and inside. I use contact adhesive as used by cobblers to repair shoe soles.
Top

I'm surprised no-one has suggested a simple rucksack. I've never used anything else. Beats messing about with panniers any day.
Top

Tis the slim I use. More than big enough for a complete change of clothes, food and a laptop.
I suspect that the person who uses a single pannier would also approve of black spokes.

xerxes wrote:I'm surprised no-one has suggested a simple rucksack. I've never used anything else. Beats messing about with panniers any day.

I was always taught to let the bike take the weight, which makes sense to me. Doesn't work on a mountain bike, but otherwise why have a sweaty, loaded back when the stuff could be on your machine?
Top

xerxes wrote:I'm surprised no-one has suggested a simple rucksack. I've never used anything else. Beats messing about with panniers any day.

I don't use a rucksack because there's very little "messing about" with panniers and if the bag is on the weight bearing frame I've paid a lot of money for it isn't on me: more comfortable in terms of weight and the potential for a sweaty back.

Putting a good pannier like an Ortlieb on a rack is simply a case of hooking it over the rail. Letting go of the handle locks it in place. To remove, pick it up by the handle to unlock it and lift. Quicker and easier than pulling on or removing a rucksack, and you don't have to remove it to access it.

Even on sports machinery with no rack I'd much rather take a saddlebag, SQR, front basket or similar than a rucksack.

Does on mine... I use rack and panniers for non-technical stuff, but if it's technical enough that I don't want to compromise the balance we're well outside the realm of most "Commuting Luggage" eventualities.
Often seen riding a bike around Dundee...
Top

Well yes, I admit that I was thinking of mountain bikes as in bikes used on mountains. Which isn't for commuting, usually. If it's got a rack, it's not a mountain bike in my view.
Top

drossall wrote:Well yes, I admit that I was thinking of mountain bikes as in bikes used on mountains. Which isn't for commuting, usually. If it's got a rack, it's not a mountain bike in my view.

There's plenty of cross country where a rack is a real benefit. This is mine taken on a day when I went exploring nooks and crannies and bits of the Sidlaws round Angus for a for a day so I wanted some stuff with me (helmet for the "interesting" bits, jacket in case the weather got nasty, tools and food). Wouldn't have made much sense to put it on my back when it could go on the rack... 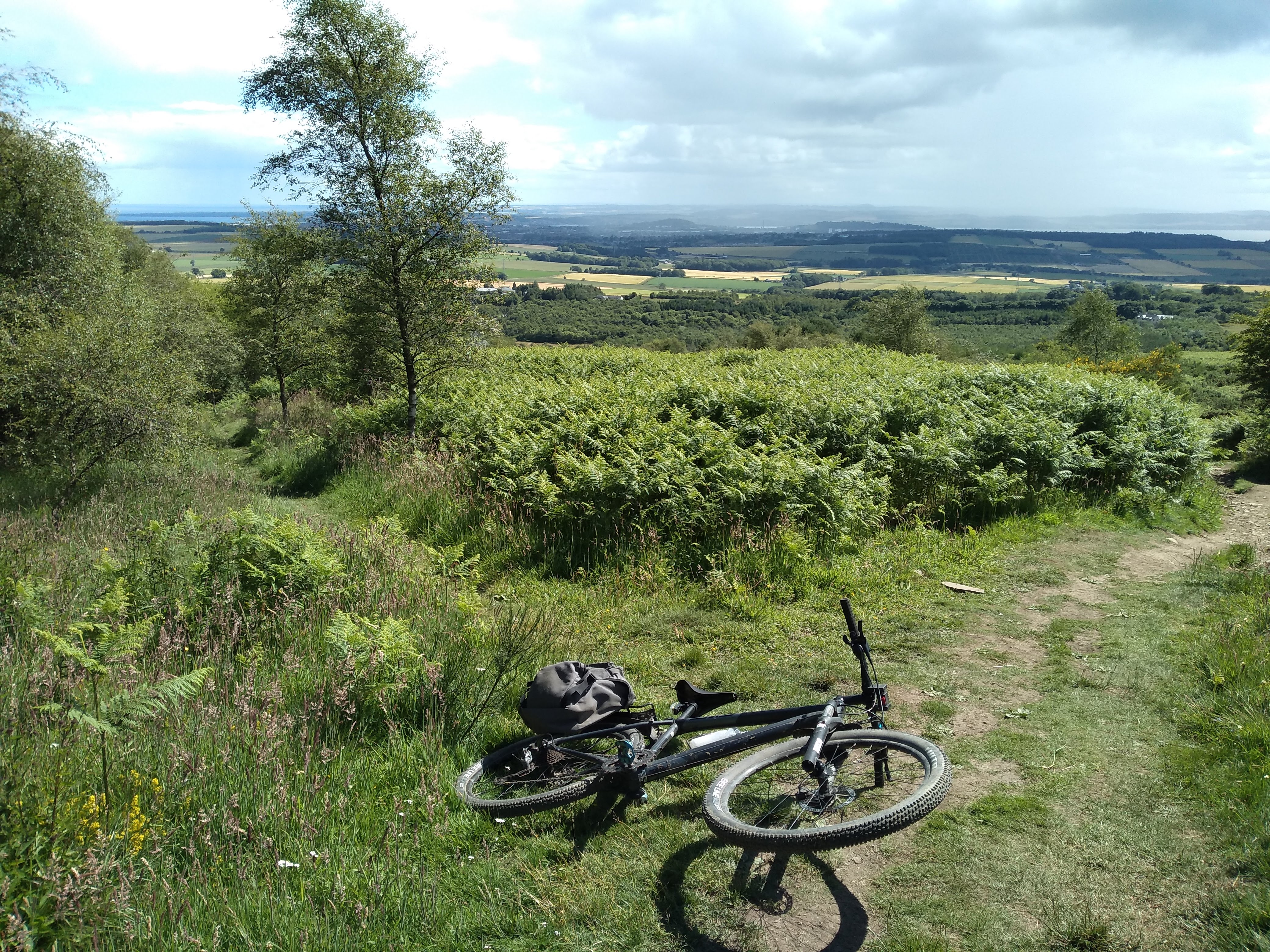 This is parked by a road between off-road sections on the same trip to pick some wild raspberries where the rack shows up better, and you can also see a further use for it in compounding my heresy: it helps keep the rear mudguard in place!. The bike has braze-ons for it and I really don't see why putting it on turns it in to "not a mountain bike". 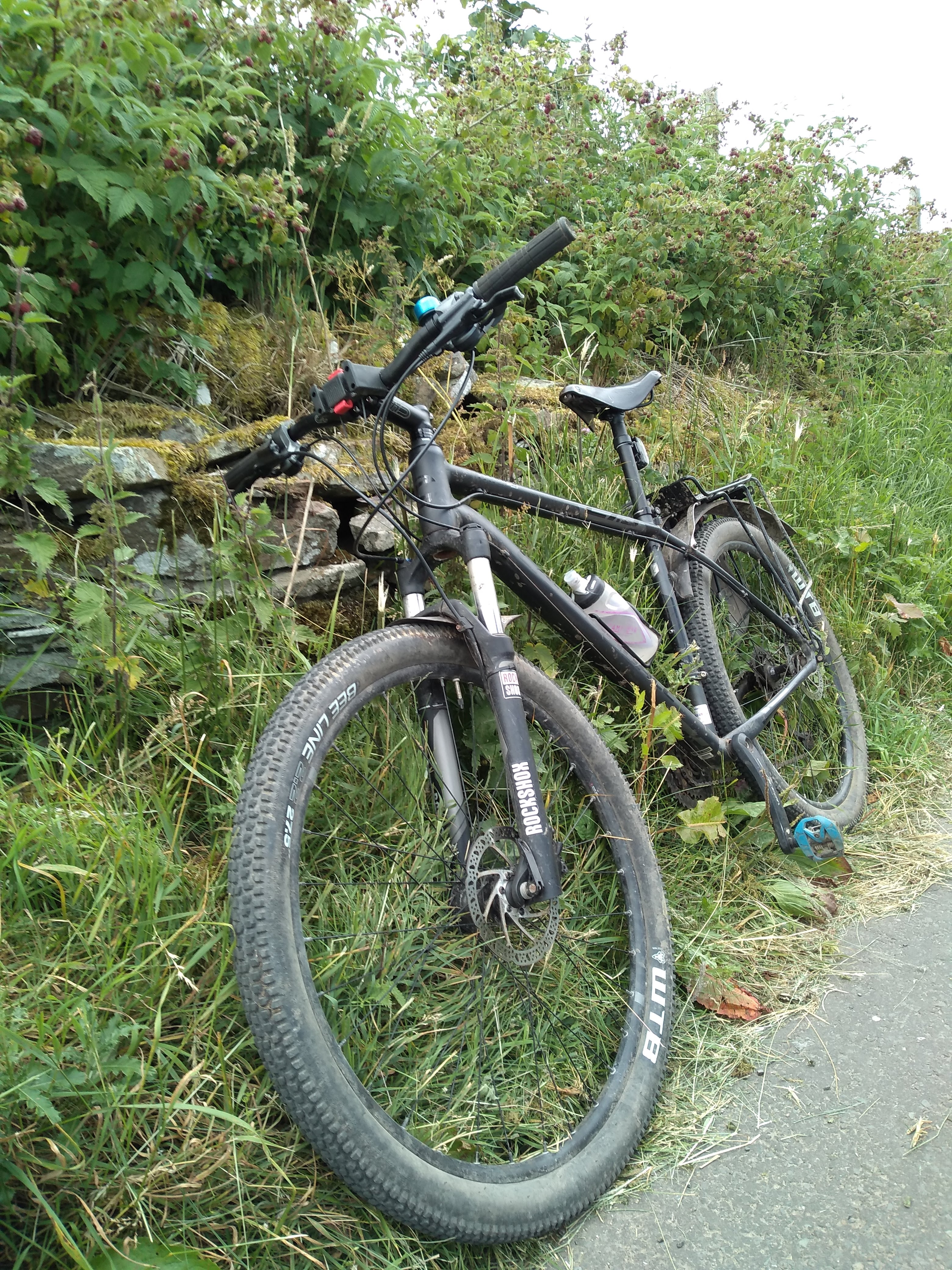