Can you explain that further please?

I think that confusion in this area might have caused quite a lot of the discussion... here goes...

Cardiac stress tests are used to study the possible presence of heart disease or its severity or extent. Raising cardiac output above the resting level is central to this. But you need to know how hard to work the patient. So a formula is used, such as 220 minus age in years predicts the maximum heart rate in beats per minute. You can then increase the exercise so that the heart rate gets to 85% (or some other fraction) of that predicted maximum heart rate. These formulae come from population studies and they won't be accurate for any particular individual, but for this purpose they're a lot better than nothing.
https://en.wikipedia.org/wiki/Cardiac_stress_test
https://en.wikipedia.org/wiki/Heart_rat ... heart_rate

In contrast you can measure an individual's heart rate as they exercise harder and harder until it doesn't go up any more. That gives you an observed maximum heart rate for that individual for that type of exercise on that occasion.

A rethink may be required if we knew he was from the subset of pro Basketball players.
Top

Bsteel wrote: ↑9 Jun 2022, 11:32am The formula might not be appropriate for the population from whom the individual was drawn.

A rethink may be required if we knew he was from the subset of pro Basketball players.

Jdsk wrote: ↑9 Jun 2022, 10:07amThe formula might not be appropriate for the population from whom the individual was drawn.

Thanks for explanation Jonathan
Top

On my short commute (approximately 30 minutes each way) I usually top out at 183bpm on the hill, and I average about 124/5bpm for the whole ride. I do like to push quite hard, but in relatively short bursts.

I occasionally just have a steady trundle, but not very often. Even then I manage to hit 165-170bpm on my rides anyway because of the hills. I like to keep an eye on my resting heart rate which can be anywhere between 53 and 60bpm. It's usually at the lower end of the scale after I've had a few days rest from a fairly steady period of riding hard, and it creeps back up steadily over a number of days when I'm back in the saddle.

RHR can be a good indicator of over training. If it creeps up 5-10bpm above where your normal range of RHR sits (so in my case 65-70bpm) I'd be thinking about taking it easy for a while.
Top

Thats interesting, because I find that exercise keeps mine down, and that it will creep-up over time if I have a lazy spell, or if im too busy, or the weather is truly awful for weeks on end. That certainly happened during lockdowns when I was running "home school" and once daily outdoor exercise tended to be no more than a family dog walk.

Possibly I've never had the time or energy to over-train, and on the rare occassions that I am able to cycle properly day-after-day, I find myself alternating easy and hard days without even thinking about it - if I do a hard day (lots of off-road climbing), I naturally go into gentle trundling mode the next.
Top

Nearholmer wrote: ↑22 Jun 2022, 11:57am Thats interesting, because I find that exercise keeps mine down, and that it will creep-up over time if I have a lazy spell, or if im too busy, or the weather is truly awful for weeks on end.

A small increase of resting heart rate as a marker of overtraining is in the textbooks and there is some evidence, although I'd cover that in caveats.

In the population of non-athletes and the world of cardiovascular disease a high resting heart rate can be a quick and cheap marker of poor cardiac performance.

After 30 years of overtraining, my RHR was 40-42, and my HR standing still 95-105. Now after ~10-12 years of resting my RHR is nearer 48, and standing HR ~75-80, but even the slightest sniff of brisk exercise quickly pushes my RHR back down again.
“I'm not upset that you lied to me, I'm upset that from now on I can't believe you.”
― Friedrich Nietzsche
Top

Despite being on a reduced medication strength, I'm still getting lethargic spells which are so chronic that I might even have to get off my bike after an hour and a half, after 10 minutes of lying down when I get back on I can barely turn on the pedals.

Last night I hit 170 and it's common for me to have an RHR of just low 40s.
It is also very common for me to do three hour rides without stopping averaging 80% of my maximum heart rate which I put today as 185 (185 is maximum not average)even though I've been using this figure for the last 10 years.
Medication means that I can't raise the maximum heart rate for my peak heart rate in a ride another 10 bpm.
So I would normally expect a peak on ride of just over 180.
I'm 63.

Of course all these figures are somewhat anecdotal because basically you should be working on percentages of your maximum anyway.
If you're in training and wanna get fitter than you really need to be doing 2 1/2 hours at 80% of your maximum heart rate.

If you don't maintain this then with age your fitness will start to drop off.

I was always led to believe that the lowering heart rate at rest meant that you were probably over training.
But like Jonathan says it's all normal

Typically I would only peak at 170 That's 92% of perceived max, if I was chasing an electric bike, chasing another cyclist I've never met, as the other day I was actually chased at night by another cyclist I thought was first the car then a motorbike but realised that as they follow me along the cycling track it was actually another cyclist, I dropped him of course ha ha, Somebody tries to drop me going uphill, the latter is normally when I'm on my training bike which weighs a ton anyway.
Oh and lastly I was in a group last night and I got lost, I didn't actually get lost The leader was too aggressive so the group split, I offered to go back to find the tail end, but they decided to take a shortcut because they knew where they were going.
The leading group decided to go a different way and didn't wait for me either.
Needless to say when I finally met up with them I wasn't very happy.
So that was a 170 last night.
I won't be doing that again, Being a good Samaritan that is

NA Thinks Just End 2 End Return + Bivvy - Some day Soon I hope
You'll Still Find Me At The Top Of A Hill
Please forgive the poor Grammar I blame it on my mobile and phat thinkers.
Top

Rather than relying on anecdotes and ancient formulae (i.e. 220-age) for which I can find no authoritative reference, I prefer to look at data. See the attached figure from the HUNT fitness study published by Nes BM et al in the Scand J Med Sci Sports 2013, 23(6):697-704, "Age-predicted maximal heart rate in healthy subjects: The HUNT Fitness Study". https://onlinelibrary.wiley.com/doi/10. ... 12.01445.x

They studied 3320 healthy men and women and subjected them to a maximal heart rate test. Note the sentence in the abstract "Previously suggested prediction equations underestimated measured HRmax in subjects older than 30 years."

The best thing to do is see where you are compared with other healthy folks. And note that for any one age there is a distribution, i.e. inter-individual variation. Therefore one may be at, above or below the norm for generally healthy people. 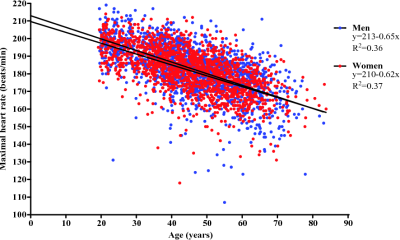 That depends on what you're trying to use this for.

Why are ‘we’ (and I include myself in that), obsessed with what our max HR might be?

There are many factors that contribute towards performance on the bike of which aerobic capacity and ability to hold a high HR for long periods is only one. The key to improving performance is to know which factor(s) are limiting your performance and try to improve those. If it’s aerobic fitness than training to increase that would be important and then HR, and the ability to maintain a high percentage of maximum would be key. However for someone like me who comes from a running background it’s not aerobic fitness it’s power.

Basically I have decades of running behind me, sometimes competitively, and have a well developed aerobic system. But I don’t have the power that comes from regular cycling over decades. So for me to improve my performance on a bike working on increasing my power would be the key. I must say I rarely bother I just go out and ride to enjoy the experience. Anecdotally I believe my power is increasing slightly just through doing more cycling. I can hold a higher gear for longer and my average speed has crept up a bit. But faced with a tough climb I return to type, low gear, high heart rate, high cadence, as I just don’t have the power to do anything else.

Btw if you want to know your max HR just wear a monitor over several weeks. Ride some very steep hills that challenge you to near your maximum abilities, observe the readings at which your heart rate peaks and it will give you a good idea. Possibly under the extremist of extreme conditions it could be a few beats higher but not much.

And then there’s the skill aspects particularly on routes with lots of bends and rough roads. And holding position on the bike for long periods in an efficient form. And probably loads of others I haven’t mentioned and might not even be aware of.
Top

Hi,
You can only really measure power on an ergometer.

You are only going to raise your HR if you raise the effort.
Keeping it there is another thing.

I believe that two to three hour constant effort rides will get you power..............eventually.

But are you wanting power or the ability to turn the pedals slowly at same power output?
The later will depend on lots of things that we may have no control over..................
NA Thinks Just End 2 End Return + Bivvy - Some day Soon I hope
You'll Still Find Me At The Top Of A Hill
Please forgive the poor Grammar I blame it on my mobile and phat thinkers.
Top
Post Reply
52 posts

Return to “Health and fitness”