I've noticed some pedestrian signs in London where the "distance" is given in minutes. I think this is worse than having a distance -- I know how fast I can walk, and it's not the same speed as anyone else walks. And it's different if I'm carrying stuff, or it's busy, or raining, etc.

The same has now been proposed for cycle route signs: in the example in the proposal "Glastonbury: 2 [miles]" could be replaced by "Glastonbury: 15 minutes".

I'd much rather have "Glastonbury: 3km" (I can compromise with miles). Then I can count down the distance, and I'll have a decent idea how long it will take based on the conditions (i.e. wind, my fitness, tiredness etc).

The actual proposal is on page 52 of Annex A.
Top

Road signs have distance, why not Cycle and Pedestrian signs too? 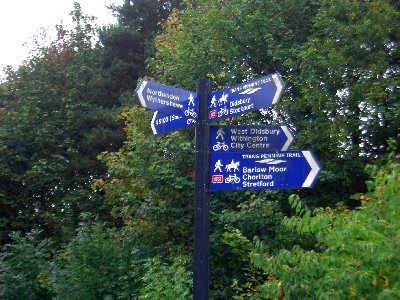 BTW, it would take me a day to get to Wells from here, and I'm a good cyclist. I wonder what the sign would say for "normal" people?
Mick F. Cornwall
Top

I agree that the distance is much more useful than the time.

I worry that the new signs showing times may not include realistic allowances for coffee stops. What happens if the service at the cafe is slow - are the times averaged to cover this possibility. How can we be expected to decide between a ready made sandwich off the shelf or a freshly prepared one which may take longer. This seems to be another example of a so called improvement thought up by someone who is probably not a cyclist.
Retired and loving it
Top

There are many cycling facilities that I think are designed by people who don't cycle, for people who don't cycle. Signs with journey times on them would be a perfect example. Anyone who cycles long journeys regularly will know how long it takes them to travel 10km. So they just need a sign showing the distance and they can work out how long it will take them personally, given their own level of fitness and typical speed.

Someone who doesn't cycle regularly, will have no idea how long it would take them to cycle 10km. So, if confronted with a 10km journey, they'd probably want someone to tell them how long it will take. So, I reckon that a sign with a journey time on it is designed by someone who doesn't cycle and is aimed at people who don't cycle.
Wisest is he who knows that he knows nothing.
Top

I'm tempted to ask why provide cycling facilities for people who don't cycle, but I understand and perhaps the compromise may be to show distances where the destination is more than a couple of kilometres away and times for those closer

It seems to me that cyclists riding any sort of distance need to know the mileage fairly accurately to their destination. It may be OK for motorway gantries to show the typical time it might take to travel to the next junction or whatever, but IMO that information in that form is meaningless for cyclists. Surely, it cannot be beyond the wit of the men from the ministry to understand that even the same cyclist may ride at different speeds depending on the occasion and their level of tiredness etc. (I suppose if they are using a typical speed - which for ease of calculation I'll suggest 10 mph - it would be some sort of aid to improving mental arithmetic eg sign says, 1 hour, that must be 10 miles away.)

In my starry-eyed days, when I was a Sustrans supporter, I had correspondence with them over distances being shown on off-road cycle tracks, which can be quite remote places and are often used by inexperienced cyclists. I cannot now remember the details, but influenced by being asked by enthusiastic but ill-equipped young lads questions like "How far is it to xxxx, mister?" I suggested that milemarkers were important. This would, for example, help somebody who was realising that they might have been over-ambitious to decide whether to retrace or continue. "And some fell on stoney ground..."
Top

These signs are, of course, already in use in Aylesbury. See http://www.cycleaylesbury.co.uk/index.php?id=9 .

I can see them being really useful in towns for novice cyclists. Mileage actually doesn't mean that much in an urban area - as Harry Beck's map fairly conclusively proved. There are just too many other variables.

But the Wells and Glastonbury example is a daft one. On a rural/leisure route, the only other significant variables are surface and gradient, so mileage remains very useful. I'm reasonably confident that, this example apart, the time-based signs won't take off in the countryside.
cycle.travel - maps, journey-planner, route guides and city guides
Top

Bonkers idea. There's nothing wrong with showing estimated journey times, but never without showing the distance as well. Given that there's only so much information can be crammed onto a sign before it gets confusing, sticking with just distance seems to be the only sensible option.

At the end of the day, though, I wouldn't trust a sustrans sign as far as I could throw it. When I did the Hadrian's cycleway, cycling towards Carlisle, the distance on the signs was atually increasing at some points.
Top

I probably would not have chosen to do that with the signs either.

I guess their reasoning could have been.

People vastly underestimate the distance cyclists can achieve. So many people cant believe I cycle to town just to go to the shops, I dont even mention the 200k+ Audaxes that people ride.
So many people are daunted by 2 miles but not by 20 minutes, which is just 6mph.
There has just been a campaign of "five miles to fabulous" To many of us 5 miles is nothing but to many it is too much to consider.

So Sustrans have probably decided it is better to sign in a way that encourages novices, after all us experienced cyclists should be on the road (where we belong, shouldnt we?

Also one of the major complaints about Sustrans is that the track surfaces is so variable. If you dont know if you are getting a clear tarmac route or a forest track with 20 stupid cycle barriers on it, then 15 minutes is a lot more informative than 5 miles or 1/2 a mile would have been.

In Wales it is quite common for the height climbed to be more important than the distance cycled. I dont ever see that on the signs. A time would be more useful than a distance in that case.

I do remember when I lived in Australia that it drove me mad that people never gave distances in miles, they always said it in time.
It wasnt what I was used to but it was a more useful system as it tells you directly the fact that you are (in the end) using the distance figures to calculate.
Yma o Hyd
Top

meic wrote: ... Also one of the major complaints about Sustrans is that the track surfaces is so variable. If you dont know if you are getting a clear tarmac route or a forest track with 20 stupid cycle barriers on it,.

I'd go for a sign that said, "RUBBISH SURFACE. 20 STUPID CYCLE BARRIERS AHEAD.
Top

meic wrote:People vastly underestimate the distance cyclists can achieve. So many people cant believe I cycle to town just to go to the shops, I dont even mention the 200k+ Audaxes that people ride.
So many people are daunted by 2 miles but not by 20 minutes, which is just 6mph.

Yep, you're right there. A friend of mine, who only started to do any exercise at the age of 30, would never have believed a couple of years ago that he could cycle 15 miles along the Deeside Way - the first time I dragged him along that path, I lied to him - we'd only go to the next village, not far, then we'd turn around. It was only when we got to the end that he realised he was capable of it. Today, we did it again, in about 90 minutes. He didn't get wise to me lying even after I dragged him up Bennachie, lying all the way.

It comes down to what Sustrans paths are for. Personally I generally use the road, there are far more of them, and they go to useful places.
Cynic? No, an optimist tempered by experience.
Top

I sometimes follow the blue signed routes in London, especially if I don't know the way and haven't had time to consult a map. They are reasonably reliable and being mostly quiet routes it's more relaxing than trying to follow car direction signs through unfamiliar junctions.

skrx wrote:My concern is that "Paddington 4 miles" will become "Paddington 20 minutes", and I won't know if that's 20 minutes at 4:30 on Sunday, or 17:30 on Thursday with the shopping.

Summed it up beautifully!

Yes. Somebody above has suggested this will be helpful to inexperienced cyclists. I would expect that they would be no better off (and to the extentent that this will be pretty subjective, probably worse off.) OTOH, experienced cyclists will get used to it. I suppose it's like a lot of direction signs, especially the poorly thought out stuff by the Highways Agency: you are OK if you are familiar with the area.
Top

I dont know London but I do know that you can waste 5 minutes everytime you try to use a pedestrian or Toucan crossing at a traffic light junction.
So a 4 mile canal path is going to be a lot quicker than 4 miles of Toucans, stupid barriers, cyclist dismount signs and give way to every drive along your cycle track.
The 4 miles should be an undeniable fact so it is much safer for the person writing the sign to stick to the facts. By giving a time they are both taking a risk and trying to be more informative. Obviously neither 4 miles or 20 minutes on the sign will let you know exactly how long it will take. Both let you know roughly what is entailed and I dont see how they can do any more than that.
Yma o Hyd
Top
Post Reply
37 posts