Use this board for general non-cycling-related chat, or to introduce yourself to the forum.
Post Reply
4849 posts

If you had been following this thread you would know that happily, yes my X-RD5 has produced twins, both XL-RD3s. I'm thinking of naming them "John" and "Edward" otherwise known as "John & Edward".
ToggleChain Tourist - http://www.togglechaintour.co.uk/
Top 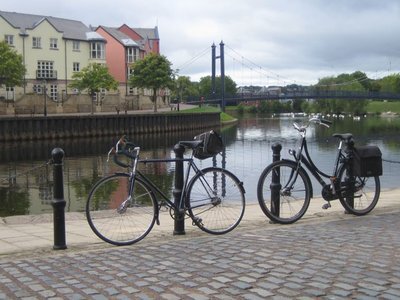 We haven't done anything as heroic as a hundred mile tourette. These were taken on the scenic route to Sainsbury's. This was the first time I have seen the canal bridge working. It caused a splendid traffic jam! 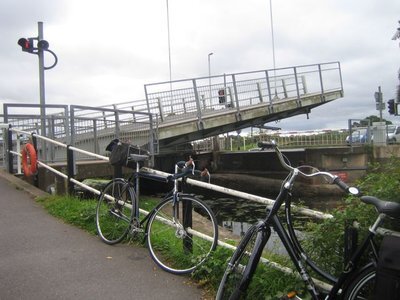 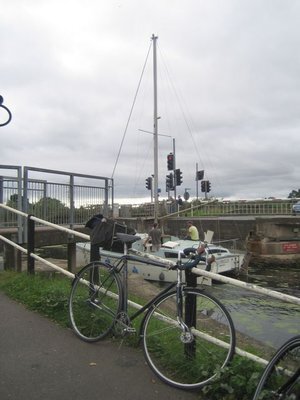 Very nice Steve. I like the huge saddlebag instead of a rack - must think about doing that myself sometime rather than cycling around with only one pannier.

This was the first time I have seen the canal bridge working. It caused a splendid traffic jam!

Bloomin' boating-folk holding up the traffic, and they don't even pay road tax or have to take a test. I bet most of them float around without any lights too.

lovely, is it one you've just made, just bought or had a long time?

corshamjim wrote:Bloomin' boating-folk holding up the traffic, and they don't even pay road tax or have to take a test. I bet most of them float around without any lights too.

and they can't be breathalysed

Those forks are certainly a bit different too!
ToggleChain Tourist - http://www.togglechaintour.co.uk/
Top

GrahamNR17 wrote:Looks like it's down to me and Littleman to maintain nice looking ones

Mine is the more authentic though .. because of course the original BSA Para Bike was intended for drops (behind enemy lines).

That's three of us, then

Mind - there seems to be something wrong with them forks

robc02 wrote:Mind - there seems to be something wrong with them forks

sadly, the builder's long gone, and the refund would only be something like £29 6s 10d

Just bought this (from this forum): 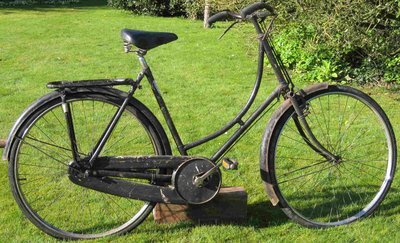 It actually came with a B66S saddle.

It is rideable but could do with a bit of fettling - wheels trueing and so on. I'll do more than that in good time, starting with a repaint.

It's a 1936 model that was overhauled around 1959. I think it was originally an "All Weather" model with black painted rims etc.

I am debating whether to stick with the rod brakes (assuming I can get the rims true enough) or to try to find some old enough hub brakes. I would prefer hub brakes but the front rim has 36 holes and I don't suppose I'll get an old Sturmey drum in 36, so I'll have to find a 32 hole 28x1 1/2 inch rim. Does anyone have a source for such things?

I'll probably fit a 3 speed hub. The bike would have had the option of a type K 3 speed or KB with brake, but I would be happy with an early AW or AB.

Anyway, my family now has 1930's roadsters for mother and daughter

There's something really elegant about those upright loop frames

You'll get a later front brake hub in 36 hole no problem, They were the default drilling from the earlyish 70s onwards, and look the part in chrome and hammered enamel, or you can re-paint the enamel part black to really fit in. Stick an AW or AB in the rear, nice and common and spare parts won't be the issue they are with K series. Besides which, AWs came out in the 30s, so it won't be wrong in any way.
Top

Besides which, AWs came out in the 30s, so it won't be wrong in any way.

That's more or less the way I was thinking - AWs came out just a year or two after this bike was made so will be entirely in keeping with it.

I'll still keep an eye open for a 32 hole rim, but building the existing 36 into a more modern front drum seems like a sensible option. After all, the front wheel is dead easy to swop if a more suitable one turns up in the future.

As for finish - I'll probably get the rims powder coated black. (My daughter would have the whole thing in pink

I decided to true up the wheels this morning - just to see if they were good enough to run with rod brakes. Well, one thing led to another - you know how these things go

- and now the whole bike is in pieces! .... and I don't think the rims are up to using with rod brakes so my initial idea of fitting rod operated drums is the way I'll go.
Top

Hmm, you could be right there - I'd been thinking all pink - and I'm not sure just how serious she is. When asked for her choice of colour for anything she always says pink

I'm hopeless at colour schemes, you can probably tell by the way I dress

, so boring (and elegant) old black with gold and red striping always seems a safe option.

The other problem with light colours is they look scruffy if not kept scrupulously clean - and guess who will be doing the cleaning?

.....but, repainting is some way off and minds can change. To be honest, I'd quite like one of our roadsters to have a "different" colour scheme but I have trouble imagining it so fall back on black.

Hmm, you could be right there -

He's not. ignore him. He's been drinking

May I remind you that you're just a caretaker, and it's your duty to ensure this old bike lives on beyond your own brief existence on the planet. Painting it pink is a sure-fire way to ensure nothing more than it becoming landfill when the house clearance people come along and clear away your leavings.

Not a bicycle, but I spotted this at a car boot sale this morning.

It wouldn't fit in the car, so it was kindly delivered about half an hour ago.