Does anyone have any good ideas where I will get a short ahead stem in a silver finish - to fit 25/26mm bars. Looking for something around 60mm or perhaps less. Got a nice 80mm stem last year, a velo orange I think, from a small ebay retailer in Cambridge, but struggling to find a shorter one now.

But they don't seem to have anything that short, but the other name for VO here, Tokyo Fixed does (60mm)- http://www.tokyofixedgear.com/products/40-Stems
Didn't notice if they do skinny bar sizes, but shims are available. Somewhere...
Top

If a stem is very upright the reach is effectively shorter, so, if you have enough spacers below the stem, you can get the same reach as a 0°, 60mm stem by mounting a 35°, 75mm stem 43mm lower on the steerer. (using this here handy calculator)

Short ahead stems these days are generally the new oversize 31.8mm standard and MTB ones are fairly widely available, but I assume you don't want to change the bars.

Also, be aware the steering will feel quicker depending how much you are shortening the stem by. Check that the hands will still be in front of the steering axis despite any sweep of the bars. Handling is wierd otherwise unless the bike is a roadster or similar with a really slack steering angle.[/quote]
Top

series3safari wrote:Does anyone have any good ideas where I will get a short ahead stem in a silver finish - to fit 25/26mm bars. Looking for something around 60mm or perhaps less.

hubjub has what you want. but odd requests made to the highest standards aren't cheap

Thank you to you all for that. I see the point about the upright stem delivering less reach - not the most attractive solution (and one I might yet go for) but less than half the price of the rather lovely but not affordable hub jub job from hubgearfreak. I have just taken off some 26 bars and put on some old 25.4 ones (not sure of the size but they must have been smaller as I had to snip a section out of an old biscuit tin to provide a shim) and I do not want to buy any more bars.

So perhaps I should refine my question - does anyone know where I could get a gently rising short stem circa 60mm long in silver to fit 25/26mm bars ....for about £20? Surely not too much to ask!
Top

I've had a look at seven or eight UK distributor sites but am drawing a blank for exactly what you are looking for.
Top

BTW BMX stems are often short enough but are usually too small in the clamp. Might be able to ream them out maybe.

Is this what you want? 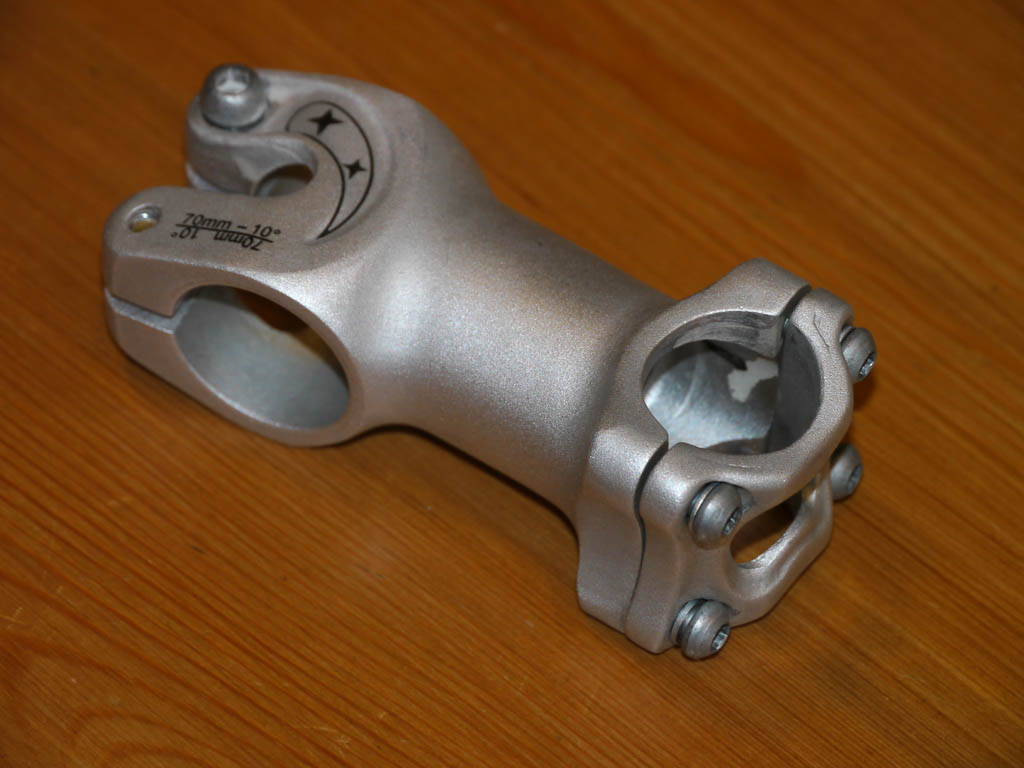 I've just callippered it, I can get it to show 25.4 or 26 across the open half end, difficult to say what the design diameter is. I'd go for 26.

Malaconotus wrote:Also, be aware the steering will feel quicker depending how much you are shortening the stem by. Check that the hands will still be in front of the steering axis despite any sweep of the bars. Handling is wierd otherwise unless the bike is a roadster or similar with a really slack steering angle.

No it won't. That's just bikeshop folklore, to justify their inability to supply what normal people want, when it deviates from what pro racers want. The stem length has negligible effect upon the steering characteristics of a bicycle, which is entirely a function of steering geometry, front tyre properties and the weight carried by it. And that's the one way in which stem length does have a small effect, by letting the rider sit a bit further back, there will be a bit less weight on the front tyre, which makes the bike insignificantly less stable and easier to steer. But if you need to sit futher back, you need to sit further back and needs must locate the handgrips accordingly.

This was proved to me by a colleague who due to a back injury could no longer reach the bars on her lovely touring bike. She simply turned the (already very short) stem around to point backwards. The bike looked really weird, but steered just like it always used to.

The physical act of steering was different of course, but arguably better.

There is nothing especially ergonomic about the way one steers a typical road bike equipped with a long extension and dropped bars - apart from the alignment of ones wrists. With hands on the hoods, they are a long way in front of the centre of handlebar rotation, so that rather than simply rotate, the bars swing side to side in front of the bike. It's as much like a boat tiller as a steering wheel! One advantage of this arrangement is that leaning forwards on the bars centres the steering. But pulling backwards de-stabilises it and makes the bike harder to control when working hard and weaving e.g. up a steep hill. It's six of one, half a dozen of the other, but you would think, would you not, that a racing bike ought to be more stable when pulling than cruising - rather than vice-vera?

The most neutral, ergonomically ideal position for the handgrips is either side of and level with the steering axis. The only reason bikes aren't usually like that is that it would place too great a constraint upon other more important aspects of the bike's geometry, so the shape of the handlebars and the stem are designed to accommodate those aspects to the needs of the rider, putting the handgrips somewhat behind or in front of the axis as necessary. Humans are adaptable and a moderate offset is not a problem even though it does have some effect upon how the act of leaning or pulling on the grips interacts with steering.

In conclusion, the steering will feel superficially different, but that's merely a matter of habituation, the bike as a vehicle will be capable of all the same manouevres and you'll soon get used to the slightly different feel of its controls. It's not fundamentally different to altering the height or reach to the steering wheel in your car.
Chris Juden
One lady owner, never raced or jumped.
Top

And now for something more immediately useful: Spa Cycles have a couple of stems available in 60mm extension.

Would that one could get something shorter than that. My daughter has a 50mm I bought some time ago and 30 or at most 35mm should be possible. Unfortunately, when it comes to high-quality bike equipment, it's an unwritten rule that unless some kind of on or off-road sports nut also wants it, the rest of us can't have it.

I basically agree with CJ re the steering feel, but having said this, I think there may be something going on when riding out of the saddle. I've never seen any good modelling or analysis of this; it looks dead complicated. What I have noticed is that the 'roadie folklore' appears to work in this case; very long and very short stems tend to feel rather odd and ones that place the hands over the front axle generally feel better. Heaven knows why; maybe its all in the mind...

Regardless of this, I don't think riding out of the saddle is that all that important for touring duties, and carrying a load dominates over everything else feel-wise anyway.

Thinking about it, putting forward pressure (arms angled rather than vertical) on the bars on a long stem will have more lever/ tiller effect than short, but there seems no issue when using butterflies, where the main grips are pretty much in line with head, so effectively a very short stem (or none at all).
Top

Nearly everything comes with black anodising nowadays - probably cheaper than polishing. I prefer shiny bits enough to have gone to the trouble of dipping my stem in caustic soda. The black anodising disappears quickly enough but getting a polished finish is another matter - takes lots of sanding and Autosol but it can be done if you are committed enough. To be fair I can see why all the components companies have created a fashion for black.
Top

A head stems yes, and many other parts too, but not bloomin road cranks and front mech cages!

But found this while looking for a stem (and other parts) for a semi retro build (i.e. not quill). Having to use hipster/chic styloid brands for such things- VO, Tokyo Fixed, etc. I am surprised Dia-Compe don't seem to do Ahead stems, although they do headsets and quills. Interloc (IRD) do some decent stuff (though much appears re-branded other's). Acor's another that does nice stuff, but not a short enough stem.
Top
Post Reply
28 posts