I've been wanting to expand my cycling a bit lately to include more off road riding. I have no intention of racing or going to a trail centre or anything like that, just exploring tracks and bridleways. I think I've heard it classed as rough stuff cycling.

I don't currently own a mountain bike and don't really have the money to buy a decent new one. I've been thinking about buying an old rigid mountain bike because even fairly high quality ones can be had for quite low cost. I really want to steer clear of the weight and maintenance issues associated with cheap or old suspension forks. I am also thinking that a rigid bike should be more versatile and could alternate as a cheap touring bike if fitted with racks.

The question is how would the lack of suspension limit me off-road? People went mountain biking before suspension. If it is mainly a case of being slower I'm not bothered about that. Is it just a case of using wider tyres and dropping the pressure a bit?
Top

I'm no expert. However, I once went across a stone-strewn path on Ilkley Moor on lightweight racing wheels with tubular tyres. Wasn't my idea to take that turning - it was supposed to be a training ride. I got my own back, as others were on bikes better suited to the Moor and therefore less so to the Chevin

You're right that the Rough Stuff Fellowship were taking regular touring bikes across mountain and fell long before MTBs were invented. Where suspension seems to come into its own is when the bike really would bounce around on stones and boulders.

On railway paths and many country tracks, suspension is a waste of time (and effort to pedal the extra weight). But look at that RSF site and you'll see that they've adopted MTBs for the challenging stuff.

So it all depends what you're planning to do...
Top

For your described activities a rigid frame would be perfectly adequate, providing that it was the right size/fit* and had MTB tyres.
A reasonable suspension fork would let you go a bit quicker if you were into putting the hammer down, but I get the feeling that you are more interested in off road touring?

Anyway, for what it's worth, I don't consider my self to be a particularly skilful MTBer but I manage all of the cross country stuff and the trail centre near me on a rigid bike with a single gear....although I'd recommend starting off with a bike with a good number and spread of gears.


* MTB frames have changed a bit over the years - initially they were more like road frames, quite big and long, and with a nose down position. Modern ones have loads more crotch clearance and tend to have a higher front end, meaning you sit more upright. Of course, if you get one with a low front end you can still jack it up with a tall stem.
BNB Community Cycling
Top

A former workmate once spent a summer taking his rigid mountain bike to the summit of every Munro. So it will go anywhere though a certain amount of pushing or carrying might be required.

Doing the Inaccessible Pinnacle in Skye with rigid MTB 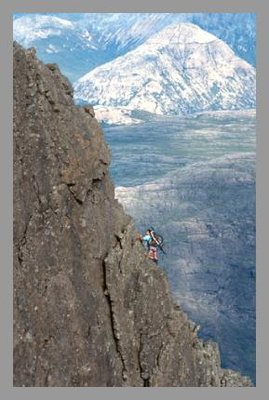 The bike below I bought as a cheap Hybrid for £137 as a runabout but decided to fit with drops upgraded the drivetrain and fit an old pair of wheels.
I had it for a couple of years and may have still had it if it weren't for the rear end only being 130oln that couldn't be spread due to being alu,it also had a crazy steep seat tube angle and so I had to fit a VK adaptor to compensate,which irritated me intensely 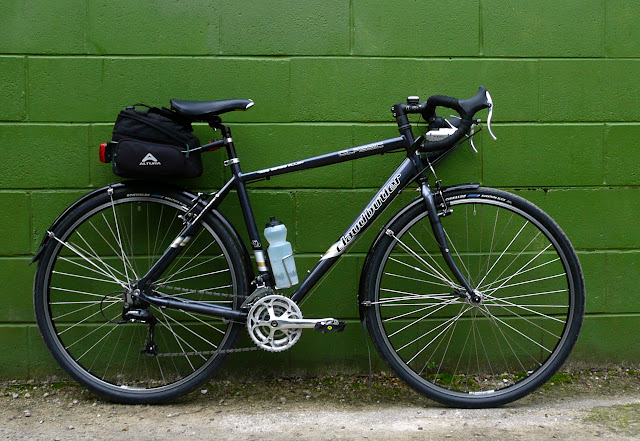 So I sold it and bought this:- 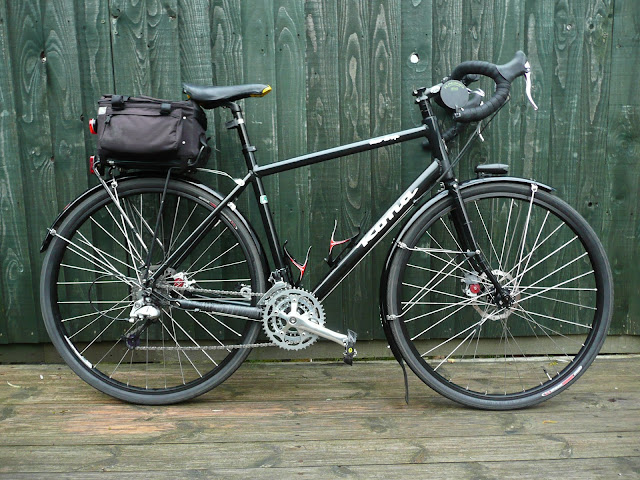 Seen with Surly Disc Trucker fork to give bigger clearances for upto 40mm tyres,to replace the original P2 fork which would only take a 32mm there's bag of room for the rear.

I also have this:- 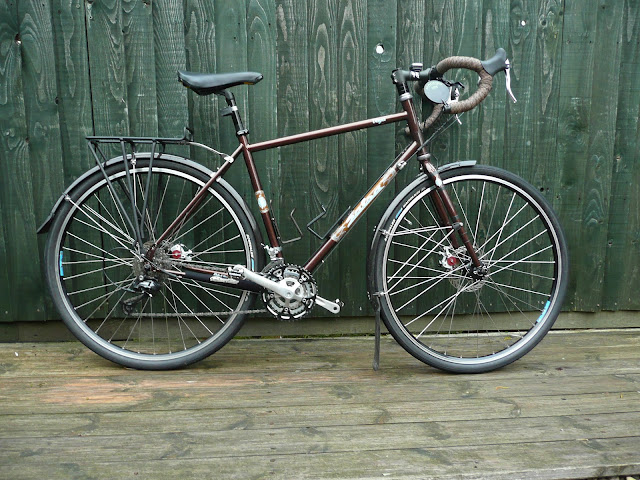 All three are,or have been used for rough stuff cycling on bridleways/towpaths/unsurfaced roads and some singletrack.
I'd buy an MTB but it would severely limit my riding on the 50 to 60% of tarmac riding to and from the R/S.
I ride 90+% of R/S on 35mm slicks,they take all but the thickest of mud in their stride and are surprisingly quick on tarmac.
I really don't want an MTB and believe I have the ideal bikes for the job,so the answer to your question is rigid bikes aren't limiting at all

I have a 20 year old Raleigh hybrid that was an early MTB-based hydrid. I don't have a mountain bike, but I do have a set of knobbly tyres for my hybrid, and it has been mountain biking and off-road touring. I have ridden a mountain bike with suspension a few times (borrowed or hired). My estimation is that even on a rough trail, suspension makes a difference in comfort and controlability only about 5% of the time. On the vast majority of off-road trails, suspension will mainly make a difference in fatigue at the end of a long ride, and little or no difference in comfort and controlability on the trail.

I have to qualify my answer by saying that I am not a serious mountain biker (or I guess I'd have one!), raced, or gone downhill mountain biking. And, I am not a particularly fast cyclist.

But I've also taken my road bike down a steep Norwegian mountain that I was told I needed a mountain bike for.

You can do what you like with a rigid MTB. I've taken one out on the black runs and off-piste trails of Morzine and les Gets with no worries. It will beat you up more than suspension - ypu have to work your arms hard if you're covering rocky ground at sepped - and on some stuff you will be slower, but it's all doable. Tyres are important - as you say, wider and softer helps. And that works best with wider rims and heavier tyres, which give better stability and a little damping via the meatier sidewall. But, unless you're planning on entering the Red Bull Rampage, there's little if anything a rigid bike can't do. It's more a case of how quickly you'll tire on the terrain you plan to use it on.
Top

Thanks for the replies, it seems I should be able to do all I want to do. Though some posts here have inspired me to see what can be done with wider knobblies on my hybrid first.

Incidentally Reohn 2, was tyre clearance not an issue off road with those bikes/tyres and mudguards?
Top

Was it crazy steep or was it a suspension corrected frame with uncorrected rigid forks on it?
BNB Community Cycling
Top

Bicycler wrote:
Incidentally Reohn 2, was tyre clearance not an issue off road with those bikes/tyres and mudguards?

Thanks. I'll bear that kind of clearance in mind as i'd probably want some mudguards, I don't think I could live with the Crudcatcher type on the DT and Seatpost. Luckily, I see quite a few older mountain bikes had eyelets for guards.
Top

There's a short video on YouTube of a mountainbike guy taking a Kinesis Decade Tripster on a "fake commute" (link). Whilst it is a cyclcross based bike, apart from the drop handlebars it isn't a million miles from an old rigid MTB. If you don't want to watch all 5 minutes of it the part showing the off road part of a ride from Hebden Bridge to Holmfirth (filmed from a chest harness mounted camera by the look of it) is from 2m39s.

My experience of rigid MTBs (I still have & ride my 1986 Muddy Fox Explorer) is that you can't easily barrel along very rough tracks in the way you could with suspension, although with your behind off the saddle & arms relaxed you can make reasonable progress. Having said that, if you watch Martyn Ashton's two "Road Bike Party" videos it is surprising what can be done (by experts) on a road bike with skinny slick tyres - particularly RBP 2 from 2m13s for "normal" MTB stuff on a Colnago C59 road bike by Chris Akrigg. 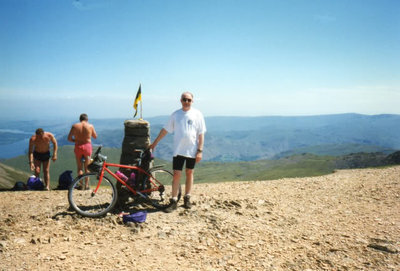 If doing really rough stuff then I would advise a suspension fork.
Long off-road rides with suspension forks is a lot less tiring than on a rigid one. 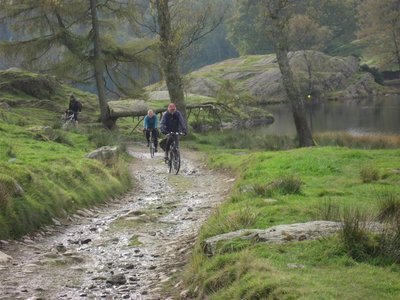 Simeon and Peter. Both on more or less standard road bikes. Simeon does have a suspension front fork though. Peter has drops.
There's no such thing as a tailwind.
It's either a headwind, or you're going well.
Top

My rigid cube doesn't limit me at all.

Here it is in mtb form after a climb up and back from Glen Etive, it's currently running midge bars with ice tyres and mudguards!