The road from Castleton to Chapel en le Frith used to go over the hill known as Mam Tor. The geology of the hillside up which the road zig zagged was so unstable that it was constantly under repair. In the end the authorities admitted defeat, closed the road and left the hillside to its own devices. But the road still features in books of bike rides, so a couple of weeks ago I went down it.

It is an amazing sight. Not pretty in any way, rather sinister in fact, but fascinating. In places the road surface is more or less intact, if at a crazy angle, with deep holes in the peat at the sides. In places the road is broken up in slabs, like sea ice. In other places, all evidence that there had been a road has disappeared, leaving almost natural looking pools, tussocks of vegetation and drifts of peat.

I was riding steadily on an apparently undamaged section. Ahead of me the road seemed to dip and then rise again or level out. I would have continued blithely on but for a boy who was staring intently at the road surface at just the point where it seemed to dip. I got off and pushed the bike. I had to get quite close to the dip to see that in fact the road had sheered neatly and dropped vertically down. If I had continued I would have crashed on to the jagged road surface below. 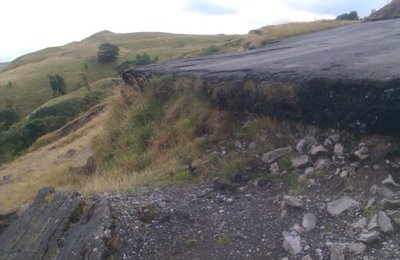 As I was carrying my bike, with some difficulty, round the obstacle, the boy’s grandfather came down the hill and said to me “Do you know, I think he [the boy] would have let you go straight over the edge?” I replied “Do you know, I think he would.” A lame response, but at the time I could think of nothing better. After a couple of weeks I still can’t
Top

A few piccies of the worst bits here

Deep cracks criss-cross the road next to perilous cliffs where the right of way has shifted vertically below where cars once drove safely along a main road in Derbyshire.

When
A shortcut has to be a challenge, otherwise it would just be the way. No situation is so dire that panic cannot make it worse.
There are two kinds of people in this world: those can extrapolate from incomplete data.
Top

Yes, great fun on a mountain bike although its a few years since I've ridden it.
Top

Some of the roads in Bolton are starting to look like that...
Bill

I've ridden up Mam Tor in it's current state but I don't think I'd like to ride down it!
A cart horse trapped in the body of a man.
http://www.jogler2009.blogspot.com
Top

Looks amazing! Nothing in this world stays still.
Top

I'm glad we rode up it first and saw the hazards.

I like the Derbyshire hills and there is some great offroad riding around this area. Not as severe as the Lakes but some testing riding never the less.
There's no such thing as a tailwind.
It's either a headwind, or you're going well.
Top

I've never ridden it, but I walked up when it was covered in black ice at Xmas 1994.
“I'm not upset that you lied to me, I'm upset that from now on I can't believe you.”
― Friedrich Nietzsche
Top

I started riding as a teenager in south-east Cheshire, in the late 1970s. The Mam Tor road was in the process of falling off the hill then. I'm pretty sure I did some trips while it was still usable.

Then I've memories of one of our group getting blown over some railway sleepers that were laid at the side of the road, to be used in an attempt to shore it up. I also remember (not sure if it was the same ride) going off a drop like the one shown by the OP and nearly taking off our chain sets. We had probably gone through a road closed sign, as cyclists do, can't remember, so I don't think it was a matter of how cars got through.

I think it was probably a case of road closed, repair, re-open, close again, till the realisation dawned that this wasn't going to be fixable.

My kids both went on school field trips (from North Herts) to the area, that included studying the (ex-)road, allowing me to bore them with the above stories.
Top

I remember going in a car along that road, probably the early 70s (?). I vaguely remember it being closed for repairs, I think several times, but my memory may be playing me tricks there.
I was surprised when they gave up on it, as there are some very difficult roads in the UK that have been shored up and sorted out. Until I saw the photos and information on this thread I had no idea that the cause was so intractable (or dramatic!).
Top

Google maps show some "new" tarmac and even a bus stop part way up the old road.
I would like to go back and have another go at ascending it sometime.
There was/is another road somewhere on the other side of Mam Tor also collapsing. Easy to bike down with care but basically the road was splitting into channels along its length. Somehow ended up in Edale where we went to the Penny Pot cafe for sustenance

.
There's no such thing as a tailwind.
It's either a headwind, or you're going well.
Top

Yes, Mam Tor is still tarmacked and used regularly to about half way up the climb. There's a set of caves (Treak Cliff Caverns) on this stretch of road which get quite a few visitors. At the top of the tarmacked bit, you go through a gate and continue up the broken road. You may have to walk a bit! The Blue John Cavern is at the top of the hill, where you get back onto solid tarmac again.

The road from the top down to Edale is called Mam Nick.
A cart horse trapped in the body of a man.
http://www.jogler2009.blogspot.com
Top

I believe Mam Tor is earmarked to become part of the long-absent NCN 6 from Sheffield to Manchester, as part of the Peak District National Park's cycling project. Don't know if any surface works are planned as part of it...
cycle.travel - maps, journey-planner, route guides and city guides
Top
Post Reply
22 posts