Specific board for this popular undertaking.
Post Reply
28 posts

Sorry I wasn't clear enough - for Day 4 leave Carlisle as you have planned but then turn left ie East on to Newbiggin Rd and then right ie South on to the unclassified road which tracks what you planned but to the East .

Here is a pic of it I took in June 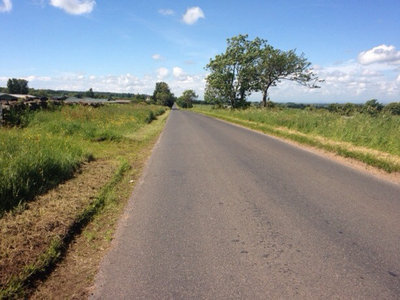 Hi everyone
I have taken every ones comments and amended the routes as suggested (hopefully correctly). Once again any comments greatly appreciated

Yes that's what I meant re Penrith - Carlisle.

I see you have taken the route across the top of Crediton - I did this going in the other direction . I hadn't intended to follow the lane but just did and it worked out really well especially as for me it was downhill all the way !

I hadn't heard about the Ride Across Britain before and looking at the video there seems to be no traffic whatsoever but the route they take is very fast but very busy . I guess they cannot have loads of riders doing cut throughs like across the top of Crediton as it could get too crowded or the riders may get lost.

But overall I think the video is somewhat misleading.
Top

The Kendal-Standish bit of day 5 looks fine. The A6 and A49 sections are busy single carriageway roads; direct and tolerable rather than scenic and enjoyable. Going through Natland on the lanes is definitely the right idea beyond Kendal. The detour round Lancaster is a bit different to most people's JOGLEs. It's not a bad idea. It's a nicer ride than going through the city but it adds a couple of miles and a bit of climbing.
Top

You must be keen to overnight at Kyles of Sutherland, more miles and the climbs from Loch Fleet and over the Struie.
Top

Have now booked flights to Inverness for 18th June... Train to Thurso then ride to John o'groats. Therefore it is now most definitely on for me and a mate.... Any advice regarding out route or just general advice is greatly appreciated
Top

richard21172 wrote:Have now booked flights to Inverness for 18th June... Train to Thurso then ride to John o'groats. Therefore it is now most definitely on for me and a mate.... Any advice regarding out route or just general advice is greatly appreciated

Add your ride at www.cycle-endtoend.org.uk and other riders will know that you're on the road

That very much depends on where and what you mean.

Much of the A49 is fine, and some of it not very good at all. A49 runs from Ross on Wye to Bamber Bridge (just south of Preston)
A49 is ok from Ross all the way to south of Leominster where you can peel off through the town. You can do the same in Ludlow too, and from Shrewsbury you can leave it and go via Harmer Hill and Wem on the A528/B5476 to Whitchurch. Again, go through the town instead of the A49.
From north of Whitchurch, stay on the A49 to Bamber Bridge.

A30 as far as an End2End is concerned isn't very good at all, but as you get way down west, it's absolutely fine.
Mick F. Cornwall
Top

The A49 section that would worry me most is Craven Arms to Shrewsbury.
Top

Done it many times, but make sure you turn off through All Stretton, Church Stretton and Little Stretton. This is the Old A49 and a lovely quiet road.
Make sure you go through Shrewsbury city centre and not go on the by-pass.
Mick F. Cornwall
Top

This is all great stuff many thanks... Any more comments more than welcome
Top

This is the finalised route for our 9 day Jogle

Many thanks in advance