For discussions about bikes and equipment.
Post Reply
125 posts

My latest little project is not so much a 'proper folding bike' as (I hope) a 'proper bike' that folds a bit.

It is a Rudge (Montague design) 'Bi-Frame' model, in a desperately tatty state. 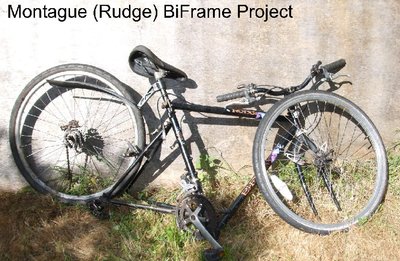 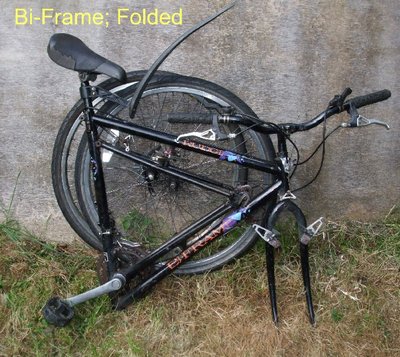 It has a number of interesting features including;

- frame made from US-produced True-Temper tubing, neatly TIG welded mostly, with brazed fork ends etc.
- two bottle mounts positioned to avoid the fold.
- folds down (enough to take on a train) in about five seconds.
- folds down fully (e.g. to fit into a small car) in about fifteen seconds, both wheels out.
- frame is probably about 1lb heavier than other non-folding inexpensive steel frames.
- frame has grease nipple for lubrication of nesting seat tubes
- frame hinge is secured with a pair of QR levers, backed up with a spring loaded bolt that looks like it escaped from the garden shed.
- components mostly cheap and worn.
- seat angle is unusually laid back because of frame design; front mech was originally braze-on because band-on would be at slightly the wrong angle.
- original braze-on mounting for the front mech has been removed.

After a certain amount of wrestling I managed to work the frame hinge, which clearly hadn't been moved in a long while. I added fresh grease and watched 'three shades brown' come out. I'm now wondering what to do with it exactly. I guess I should stick with rim brakes and derailleurs because the rear wheel has to come out quickly. I quite fancy building it up with basic but functional components (say 1 x 8 speed), 26 x 1.5 " road tyres, and using it for commuting or train/car-assisted day rides. Some kind of flat or slightly raised bar would be about right because the frame is otherwise about 2" smaller (but not shorter length-wise) than I'd use otherwise. All suggestions welcome.

Anyone have any experience of these monstrosities? Do they ride like they, er, have a hinge in the middle...?

Too good to be left in the skip.

The original Rudge Motorcycle company did some innovative engine and transmission stuff in the 1920s.

I would go for minimalist and single speed.
Top

Brucey wrote:One thing I will need is a long (300mm+ ) aluminium seat post in 26.0mm dia. Anyone got one they don't need?

Brucey wrote:One thing I will need is a long (300mm+ ) aluminium seat post in 26.0mm dia. Anyone got one they don't need?

if you have something that'll work, let me know what you want for it; I should be able to rustle up a shim OK! In fact an inline post might be just the job, what with the seat angle and all.

We had one for years. Both my sons used it including off roading. Eventually eldest let a man in Bristol have it to do up. It rode OK and felt better than many folders. Probably an interesting refurbishment project
Top

i'm jealous, all over again. In 2007 sustrans organised a camping week, in which we all rode around the Bristol Channel (except for the wet bit ~ a ferry was chartered for the Swansea to Illfracombe leg). One of the riders had one of these. It was fitted with grease nipples on the seat tube, front and rear racks, drum brakes, huge multi purpose tyres, mudguards, dynamo, and north road bars. He'd also fitted it with a triple chainset and a six speed freewheel attached to a three speed hub. He also left the cantilever brakes on, but engineered it so that they looked broken, and therefore not fit to steal. Needless to say i took lots of photos of it. If i can find them, i'll try and scan them for you..

The bike seemed to ride just fine.. both when it was loaded with all his camping equipement and when it wasn't. The trip took in the usual sustrans trails, tracks and side roads, plus some bumpy muddy off roading as well. You may have found your next train friendly off road tourer. You lucky person, you.

p.s. the cantilever brake set look interesting.. please be kind enough to drop me a line should they make it onto the bicycle bits for sale page

Just come across this thread via Google. Did you ever rebuild that Rudge, Brucey? And if so, how does it ride?

I'm after a folder at the moment that I can tour on. But properly. I can't afford S&S (unless somebody's got one going cheap?

), so I'm checking out any 26 inch steel folders that I can find. And there aren't many, which I why I ended up here...

I did find an old Dahon steel folder on Gumtree, but it had sold before I got anywhere near it.... Thread on that topic is here... http://forum.ctc.org.uk/viewtopic.php?f=16&t=96346.

Despite saying that I thought the Rudge Biframe looked a tad clumsy, I'm now looking at them more seriously, thinking that maybe, just maybe, they're the answer I've been looking for. Question is, am I deluded?

I came across b1ke's thread shortly after I came across a Rudge "Bi-Frame" locally on ebay and also wondered what one might ride like.

Still slightly tempted to buy it but:

My restorative skills are not in Brucey's league.
It would probably only see use once/twice a year.
It could rapidly turn into a money pit.
My last n+1 isn't a week old yet.

A Brucey update could be the decider.
He's got Bette Davis knees.
Top

The chap here found one as well.

I might not have to wait for the Brucey update. There are quite a few on the forum already.
He's got Bette Davis knees.
Top

Hi Gaz,
my BiFrame got built up with nicer parts (including dropped bars, better gears, nicer wheels, etc) and I've used it a few times, it has been to Holland and Germany amongst other places. The only really tricky bit is the BB; most cartridge units don't fit because the seat tube pokes into the BB shell. I still have a load of adaptations to make to it including special QD mudguards.

[edit; BTW the brake bosses are the correct spacing for Vs or mini-Vs. I used medium profile cantis (avid shortys) with short cable pull (pre-DP style) brake levers and nice cables/pads. The brakes are awesome! I would worry that when the steering and rear triangle are turned for folding, V brakes might get snarled up more easily than the cantis. As standard, the front brake hanger prevents the steering from turning too far, and the rear brakes don't foul anything. ]

Basically it is a nice enough ride, much nicer (I think) than nearly all other folding bikes I have ridden. But that said, it doesn't ride much different to other converted steel-framed mountain bikes I've ridden either, and is a bit heavier; so nice enough, but not as nice as a proper touring bike. The tyres I have on mine are about 32mm so I think going wider may well sort it out, 40s or larger will easily fit (with mudguards) and judging from recent experience if there is a tyre like a Vittoria hyper in 40-559 then this would do the job.

The only large fly in the ointment is that the frame alignment isn't quite perfect (I think it is the fork) so I don't like riding it no hands, and in addition even the most microscopic change in the position of the unfolded frame makes a huge difference to the way it steers too; it needs some care when resetting the bike straight after it has been folded.

I took a look on e-bay and I think I found the bike you are looking at. That one is a bit like mine I think in that you would probably ditch everything apart from the frame and fork, maybe keep the cranks and mechs or something (I know you like your suntour stuff..

). The seat pin looks new but it has too much layback for one of these bikes, with its super-slack seat angle. The standard wheels are nothing to write home about. However in addition to all that I think the one on e-bay has a slightly bent fork; it might be the camera but I think the fork is pushed backwards slightly.

If the fork is bent then a bit less (about 2/3rds) is more like it, I'd argue; maybe the vendor will take an offer. If you buy it and then don't fancy it, I'll take it (or just the frame and fork) off your hands (bent fork or not), no worries.

He has a 700C version. Mine came without the QD mudguard fittings, and without the tabbed doo-dahs holding the front wheel in.

Thanks very much for the info Brucey. I'd be confident that you've found the same ebay one as I've been looking at. It didn't sell last time around, the vendor has dropped the price.

I'll think on, but arranging a visit to inspect before placing a bid may be the order of the day.
He's got Bette Davis knees.
Top

I thought the same thing.

There's another one here that the seller is willing to post. Not great condition though.