For any one living in London ( who has a freedom pass to get there free by train ) I have found a very nice short ride along both sides of the river crane in Crane Parks, Hounslow.

Train stations either Twickenham or Whitton ( the closest )

It is a really lovely ride one side is tarmaced but with dirt track off shoots that go closer to the river, the other side ( newer I think ) is graveled winding around under avenues of trees. A real bit of wilderness. There is a nature reserve and whats left of the Gunpowder industry ( tower for making musket balls) There is a refreshment kiosk open during the winter in the east end in Kneller Gardens.

I live nearby and have several times used the tarmaced path for parts of journeys between Twickenham and Feltham. I've never used the meandering gravel one.

There is a problem with very limited clearance under the two bridges near the Hospital Bridge roundabout.

While I have often ridden along this way in the dark, some local cyclists avoid it for fear of muggers. My own experience suggests that those fears are exagerated.
Top

I may take a look one evening in the summer, I work in Hampton Wick quite often and always bring my bike with me when staying in hotels in the area.
Top

I would think muggers get lean pickings at this time of year when it gets rather cold there and so few people use the route when its really dark as not to be worth the bother? It would be interesting to know if and how many instances of mugging happen. Certainly the few times I have ridden it in pitch dark I have not yet seen any lurkers, they would probably be dazzled by my front light any way. I have seen kids on occasion with their torches hanging out in Kneller park at the east end, after dark but they seem innocents.

The south gravel path is the nicest but only runs about 1/2 the length of the park. Yes you have to be careful of the bridges to avoid knocking your block off, but you can detour over the road and avoid them.
Last edited by mercalia on 4 Jan 2015, 1:27pm, edited 1 time in total.
Top

SteveHunter wrote:I may take a look one evening in the summer, I work in Hampton Wick quite often and always bring my bike with me when staying in hotels in the area.

well its a very pleasant way to pass 30 mins or so, longer if you look around.
Top

You can see in this case those around Crane Park

Not wishing to be offensive or anything like that, but why does this particular cycle route deserve it's own thread?
There are hundreds or more of these nice little rides dotted all over towns, villages and cities all over the UK and I dare say that each rider who cycles them has his/her own personal variation of them.
Bill

well the intro to this part of the forum refers to " Commuting, Day rides, Audax, Incidents, etc. ". So why not? Unless I misunderstood the meaning of "day rides", anything less than a full on tour. I would be glad to hear from other people ( in london ) and their fav bits and pieces. Maybe if other people have their own discovered bits and pieces then compile into some thing bigger? The place is sufficiently charming, not just a ride, but a place made easy to explore with a bike. Its called local knowledge. eg Talking to some kids who use Hounslow heath as a dirt track for their motor bikes I found the access route they use, by the GPO depot, which leads to a wild part of the heath, well away from the flat empty part served by the gravel cycle route. There are lots of threads here which concern very few people but no one complains.
Top

They all deserve a thread, this one just got lucky

seems like this short ride is mentioned by Sustrans as part of the national cycle network. So a worthy visit
Top

Vantage wrote:Not wishing to be offensive or anything like that, but why does this particular cycle route deserve it's own thread?

On the other hand why shouldn't it?
"It takes a genius to spot the obvious" - my old physics master
Top

well here is some added justification. The park mentioned above is only a small part of the so called LONDON LOOP. The river Crane wanders thru London and eventually joins the Grand Union Canal. it is possible to extend the park ride considerably. The "new" parts represent a more or less neglected section of ride by the river Crane kept alive by walkers with their dogs and others rather than the action of the local councils - various signs show faded neglect. The extended ride crosses many main roads, the Great West Rd dual carriage way in particular requires a detour down one side on the path to Dick Turpin Way and then back up again the other to just oppsite and onto a bit of Heathrow Airport road ( Eastern Perimeter Rd ) and by the side of a electronic barrier gate on Earhart Way ( a dead end road ) The route could be further extended by the so called Hillindgon Trail, a 20 mile trail from Cranford to Harefield.

I have had great fun exploring these paths. Most are narrow flat dirt track, some are a bit stoney, I did it on my Dawes 1-Down with 1.75" Marathon tyres but a mt bike would clearly be better. Some bits I walked or went very slow due to the rough stoney surface.

To access this "new" part you need to get onto the west edge of Hounslow Heath where the river Crane runs ( not so easy unless u have local knowledge) So turn left at the west exit of the looked after section of Crane Park at Hounslow/Hanworth Rd, cross the road at the zerbra crossing a short distance down and go thru the gate directly ahead onto a nice gravel path. Follow this until u ascend a mini hill where there is on the right side a seat with 2 owls on it, follow the narrow track on the right thru close vegetation to a metal gate/fence then at the dirt T junction turn right and thru the gap in the metal fence a little way along and turn left follow this past the rusty car shell and u are on your way 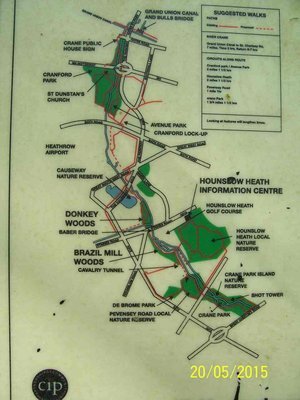 The rougher part of the river Crane kept open only by use, neglected by councils 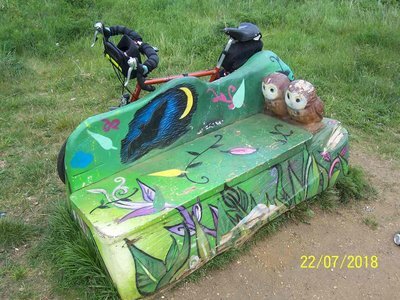 I will add some pictures I took when I have uploaded them. My camera decided to do a "back to the future" with the date stamps :

To get to the river Crane path proper, you have to go under the so called cavalry tunnel under the railway as once Hounslow heath had a cavalry regiment there 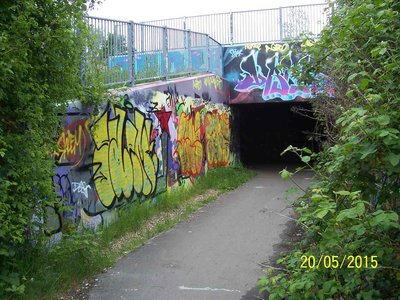 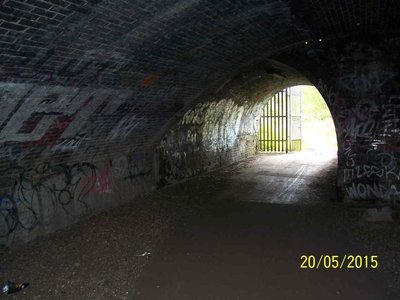 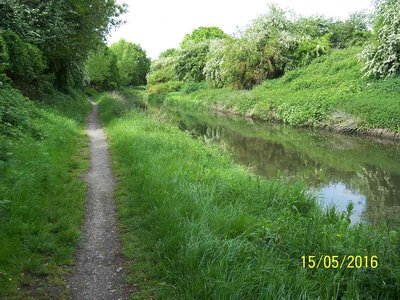 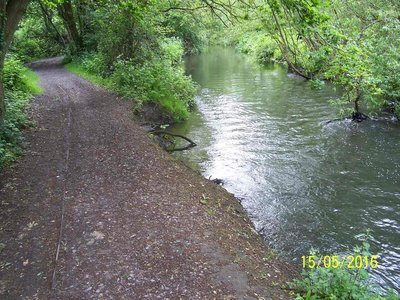 Crane path have to ride with care 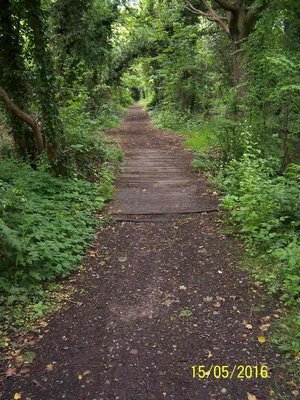 thru paths covered with tree arches

Thanks for the update

we've just got back from exploring some similar waterside hidden gems around Stockport; very satisfying to get intimate with the nooks and crannies of your local area