Use this board for general non-cycling-related chat, or to introduce yourself to the forum.
Post Reply
363 posts

No real idea where this subject should be posted.

My Moulton TSR30 arrived this afternoon via Parcelforce.
Not ridden it yet, though assembled the bike and fitted some flat pedals, so ready for a test ride tomorrow.

The bike came in a big box and some bits needed fitting ............ 'bars, front wheel, front mudguard, seatpost and saddle.
Everything else was assembled and adjusted just fine.
I had a go at splitting the bike. It took seconds to split TBH, but re-building the frame took me ages due to not knowing which cable went where.

All this was done in the living room in front of the fire.
Damned cold and wintery outside. 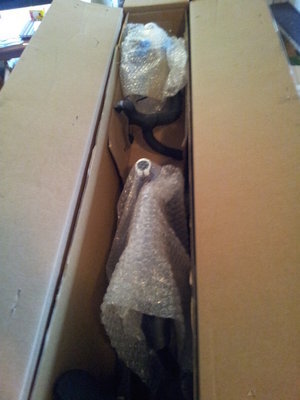 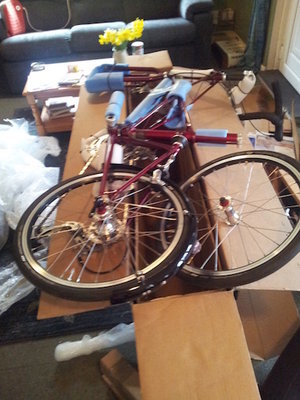 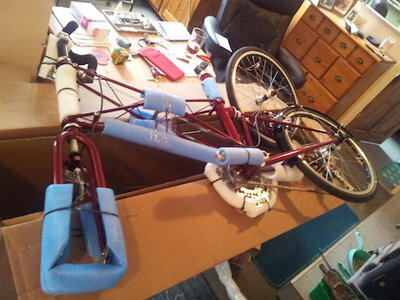 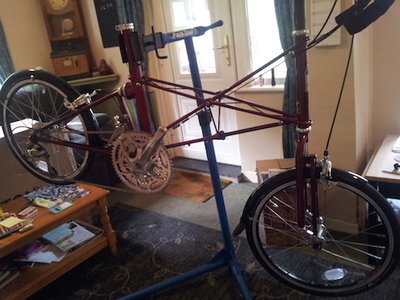 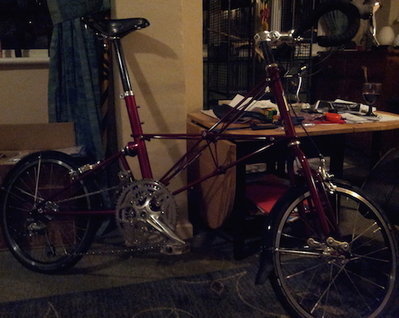 Looks good Mick, I'm looking for a cheap 1970s model if anyone has one in their shed!
Top

Nah, they won't coz of the suspension, although the rims will, right enough - never thought of that... Tyres will too... STOP BEING JEALOUS!

Brightened up the last photo for you, Mick - you'll get better pics in daylight, of course... 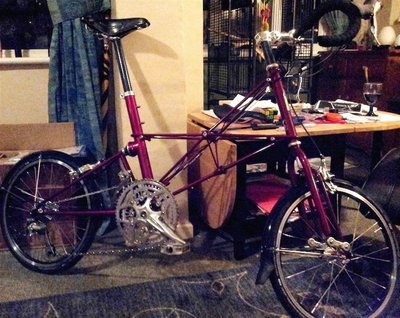 Thanks guys, and good morning.

Yes, a daylight photo will be better. Maybe I should have used the flash or turned all the livingroom lights on!
Outside photo in the sunshine(?) later this morning.

After breakfast, I'm off on a test ride. Not far, just up and down the lanes to see how I get on.

Main concerns are regarding this Shimano stuff. I've been using Campag Ergos for years and years and I feel that STIs aren't intuitive. No doubt I'll be clicking in the wrong direction or something, or perhaps trying to find the buttons. It took me ages to stop reaching down for the down-tube levers when I went over to Ergos, so this is another learning curve for me.

I'm slightly envious. I've liked the look of Moultons for many years and the only thing that has stopped me going that way is the restricted choice of rims and tyres. I bet that bike rides really well on uneven road surfaces. Personally, I found STIs pretty easy to get used to. Big lever for bigger ring / sprocket, small lever for smaller ring / sprocket.
Top

That picture reminds me I still haven't got our Gledhill-Brook clock repaired. Similar to yours Mick I bought it out of Leyburn Auction for £10 nearly 40 yrs ago.
It did work until our last move ( 18 yrs ago

)
Whatever I am, wherever I am, this is me. This is my life

^^^You have to punch in at the end of every ride?

@MickF, I'm in the jealous queue as well. Daren't buy one 'cos I fobbed the non-cycling missus off with a Dahon.
Have we got time for another cuppa?
Top 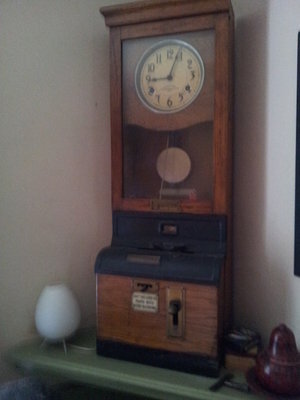 Late father-in-law was given it when they updated the clocks in the factory where he worked in Lancashire. We've had it since then, and that goes back to 1974. It's been ticking away in our house since then. Two homes in Scotland, one in Plymouth, then another two in Scotland, another in Plymouth, and two here in Cornwall. It's certainly moved around!

I've cleaned and oiled it a couple of times (only) in all those years.

Five mile test ride complete.
A couple of adjustments to be done - front mudguard not quite centrally and the 'bars need tilting up a tad. Other than those, all was wonderful!

Off out for another - longer - ride later.

Likes:
The ride is superb. It absorbs the bumps in the road and I even went looking for them to try it out!

The ease of balancing. I can go slower because the smaller wheels seem to react quicker.
The quirkiness of the bike. No doubt some people will look twice when I sail past!
Absolute JOY to ride.

Dislikes:
STIs. I don't like how the RH control needs one click per cog going up the gears. With Ergos, you give the button one long press and you can go from big cog to small cog in one movement. Going up the block is the same ie one, two or three clicks just like Ergos so that's ok.
Also, I don't like the shape of the brake levers. The hoods are nice and comfy, but it's good that I have big strong hands because doing a good hard brake from the hoods isn't very efficient. I wouldn't like to do an emergency stop from the hoods. With Ergos, it's easy and powerful but these STIs seem weak and badly designed. Maybe I'll get used to them ........... I'll HAVE to!

Another dislike is the position of the water bottle. It catches on my legs ....... rubs gently is perhaps a better expression. Again, I'll have to get used to it.
There are other bottle bosses under down tube but they wouldn't be convenient for using whilst riding.

General comments:
The gears and chain are a bit clunky though work perfectly. Maybe it's that everything is brand new and needs wearing in.
Honking out of the saddle is a bit strange as the front suspension bobs up and down. No problem, just strange.
I can see me wearing out the 11t cog as the gears are a bit low. The bottom gears are fine, but it needs about ten more gear inches at the top end. Only way to do this is to spend money on a 62t outer ring or spend a fortune on a 10t Capreo hub.

Yet again, I'll have to get used to it.

As promised, a photograph.
Please excuse the green tie-wraps securing my Garmin Montana. I'll work out something more elegant sometime. It would have helped if I'd had black tie-wraps! 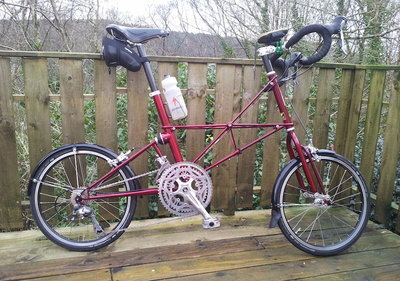 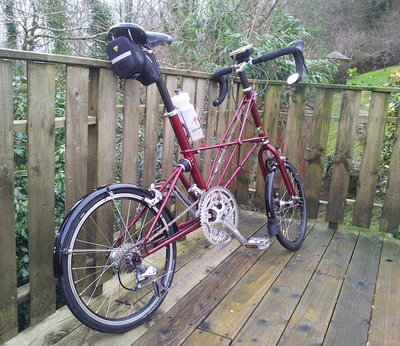 All bikes involve compromises, and I could happily get used to a bike that runs out of big gears on fast descents if it makes up for it by allowing you to glide smoothly. Maybe you need one of those quirky aero water bottle systems to stop your legs brushing the bottle.
Top

Looks good Mick but the water bottle brushing would annoy me. I like the mirror, looks neat, what make is it?
Whatever I am, wherever I am, this is me. This is my life

.
Looking forward to an in depth review when the newness has worn off,as I feel It'll be a bit more objective than a Moultonphiles who tend to be a leettle biased

Perhaps you've not compared the brake levers to Campag?
It's not that the STI brakes levers and the Tektro DP brakes aren't good, because they are. It's the shape of the levers that isn't so good.

The LH STI seems as though there's a lack of lube inside it. It's rough-ish. Maybe it'll wear in.
The RH STI feels a bit better, but I reckon the rear mech return spring isn't strong enough. Tiagra model.
It's perfectly indexed, but every so often going to smaller cogs, nothing happens, so I click again, and it goes two cogs! Coming back up it's fine. Again, it may wear in.

reohn2 wrote:BTW i can't find any geometry figures on the Moulton website anyone any ideas?

I've no real figures, but it seems to me to be 72deg parallel. Wheelbase is 105cm (just measured it for you)

On the subject of STI, I like the red indicator needles, but why oh why are they the wrong way round?
Why, when the front or rear mech moves right, the needle goes left!

Paulatic wrote: I like the mirror, looks neat, what make is it?

Busch & Muller Cycle Star 80 Mirror - Bar End Fit
Bought from SJS Cycles. I have one on the Mercian too. Excellent mirror.

Mick F wrote:It's not that the STI brakes levers and the Tektro DP brakes aren't good, because they are. It's the shape of the levers that isn't so good.

Just done some comparisons and measuring.