Anyone used this stuff for emergency puncture repair what is it like to use on presta valves? 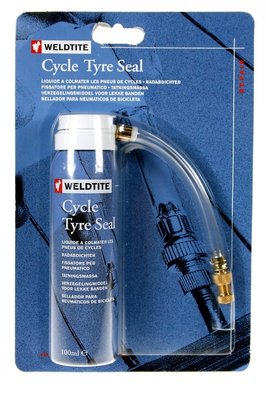 I've used the Bikemate and Zefal competitors. If the small sharp that caused the puncture is removed, they work fine as a get-me-home but I couldn't get them to hold a seal above 60psi. If there's a big cut, it won't seal. Presta valves are fine, using the adapter on the end of the hose. Use and failure are both rather messy, with the liquid that escapes as you detach the can covering everything in a latexy film (and the same liquid will escape from too-large holes and loose joints between hose, adapter and valve).

I still carry one and I'd use it when it's too cold or wet or I don't have enough time or shelter for even an instant patch, but an instant patch would usually be my preference.
MJR, mostly pedalling 3-speed roadsters. KL+West Norfolk BUG incl social easy rides http://www.klwnbug.co.uk
All the above is CC-By-SA and no other implied copyright license to Cycle magazine.
Top

Thank you which instant patches do you normally use and are they reliable thanks.
Top

I've used a similar product once, many years ago. I kept it in reserve in my saddlebag side pocket and one morning riding home from nights in the snow decided to give it a go. It worked in that it fixed the puncture and inflated the tyre to decent pressure. As it seemed ok I left it as it was, then one night found I had a slow puncture some distance from home. Very slow but the tyre was too soft for riding on. I couldn't get any more air into the tyre with a pump so I assumed that the gunge had "repaired" the valve as though it were a puncture.
Top

I've used Weldite with some success on Schrader valves as a get me home measure. I did get a very good repair on my Brompton once and kept the tube inflated for some weeks. I changed my commuter bike to Schrader valves for this reason. On presta I did get home once with low pressure but it was much more difficult to insert and yes it is messy.
Last edited by David Cox on 17 Dec 2018, 6:06pm, edited 1 time in total.
Top

Used it on the wheels on my kids' pushchair when they were small - worked fine. The little tyres were horrific to remove and I never fancied fixing a puncture in a town centre with an irate infant supervising.
Top

foxychick wrote:Thank you which instant patches do you normally use and are they reliable thanks.

I prefer weldtite red devils but have been using slime scabs lately. Park Tool and Revolution have also been fine. I replace them with real patches when I have time.
MJR, mostly pedalling 3-speed roadsters. KL+West Norfolk BUG incl social easy rides http://www.klwnbug.co.uk
All the above is CC-By-SA and no other implied copyright license to Cycle magazine.
Top

Poundland do a version of this and I have used it quite successfully on my daughters bikes with schrader valves. They seemed to get punctures with such alarming regularity at one time that i was willing to try anything and it seems to have done the job.

Some Poundland stuff stuff costs more than a pound these days but this sealant and small spray cans of WD40 and 3 in 1 are still a quid so I usually pop in and grab one of each when I go past to keep stocked up.

I haven't tried using it on Presta valved tubes though but I did try a runny 'road bike' version of slime (cant remember the name of it) a few years back and it clogged the valves so they wouldn't seal unless you tightened them with a pliers and I would be worried this may have the same effect.
Top

Although the basic idea is the same - sealant emerging from puncture seals it - Weldtite isn't slime (unless they have changed it. AFAIK, a Weldtite can is intended to inflate the tyre and repair the puncture, while slime is put in as a precaution, to fix punctures as they occur.
Top

Yes your dead right of course, and that is exactly what I was trying to say, only not very well by using the word slime. The stuff I used was very thin so that it would flow into the presta valve stem with the valve removed.

I'm sure it was latex based the same as the Weldtite stuff, but there was no gas involved to inflate the tube, just a liquid.

It kept clogging the valves though, and siezed the knurled bit on the thread of the valve (corrosion?). I changed the valves a couple of times but it happened again, so I retired the tubes in the end - don't remember ever having a puncture though, so maybe it worked, who knows