PH wrote:You can make any comparison you want, but the link says the frameset has a full price of $750 and currently on offer at $675 which is around £600/£535 so I don't know where you get the £1k from, I haven't seen any UK pricing which will of course be subject to different sales/import tax.

Look at the prices of Salsa and Surly in the US and compare with the UK .

To what aim? I've already given you the US price of a Vaya frameset, $1,000, this at $750 isn't so different as to cause a fuss. You may call it bonkers, I'm merely pointing out that it isn't any more/less bonkers when compared with other US makes.
There was a time when I could import SOMA frames (And pay the tax/duty) cheaper than a UK equivalent, those days are gone...

Sorry,I thought the Vaya price you posted was in £'s had to check that it's in $'s,(it's me you know

).That's even worse than I thought,when I bought my Blue Vaya frameset from Triton cyclies it was £445 delivered.
I'll take back the 'bonker's' and trade it for an 'expensive for what you get for your money' if that's OK

There are a couple of Soma frames I quite fancy, but it's hard to get hold of them in UK. Correspondingly hard to get a first-hand opinion.
Top

Brucey wrote:if you take a Raleigh Twenty, fit better gears/wheels and weld a crossbar in, you will come fairly close to the minivelo riding experience.

Cannondale hooligan is popular also i own a xootr swift folder, never used the folding mech but know its there if needed, hundreds of pages on this on U.S forums and parts are easily swapped to turn it however you want it, only downside is a 34mm seatpost so i imported a specific cane creek thudbuster from the states and its very strong, no flex city weapon, still get them on ebay for around £650 new.
Top 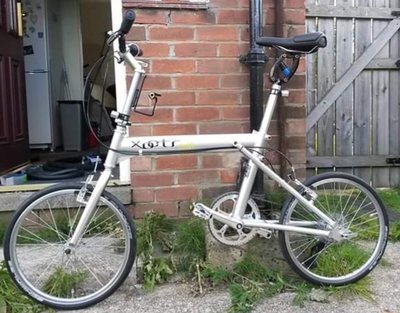 A pal of mine who lived on a narrow boat and had to moor quite a way from his car sometimes used to swear by a BMX. This looks like basically the same thing jacked up a bit. Looks like a hoot to me.
Supporter of the A10 corridor cycling campaign serving Royston to Cambridge http://a10corridorcycle.com. Never knew gardening secateurs were an essential part of the on bike tool kit until I took up campaigning.....
Top

I thought you meant these. Anyone remember the brief craze for them a few years back?
Top

Campag wrote:Small wheels without suspension results in a very bumpy and harsh ride. There are advantages to small wheels in designs such as folders (Brompton, Dahon etc) or small wheeled road bikes (Moulton). If it is an unsuspended frame, better using large wheels.

Use of larger volume tyres helps (OK you can do that with large wheels too). My Circe Helios tandem is currently running 47-406 Greeguard Marathons (I have run 55mm Big Apples which are more comfortable but I have a tendency to take it off road & found the sidewalls, particulalry on the rear, tended to get damaged too easily). The ride compares favourably with my friend's Cannondale running 32-622 Panaracer Ribmos. One advantage of small wheels is that, everything else being equal, the overall length of the bike is shorter. At the same wheelbase & tyre width the overall length is around 20cm/8inches shorter.

Slightly OT. With the Circe Helios the chainstays are also shortened decreasing the overall ength still further. For one thing, this means it is easier to get it on a train. A couple of weeks ago we took it by train on a cycling weekend out to Caernarfon. I've never had a problem with it on Transport for Wales (previously Arriva) and the same was true on the outward journey. Coming back along the North Wales coast from Bangor the first train (& the 2nd) was a Virgin Voyager. Usually for short hops on Voaygers on the West Coast Mailine I've just put it on its stand & stayed with it. The train manager on this train was insitent that it was hung up or we'd have to get off at the next stop! I got it to fit

The Circe's QR bars & very tall stem extender helped meaning less bike to try to pivot round but I doubt that a full sized tandem would ever have been made to fit at all.
Top

I was once asked to organise an "Olympics" themed event for County Scouts and Guides. Nothing was quite like the real sport. We did weightlifting using plastic cups on a tray; same rules that you had to say what you'd lift and you couldn't then reduce it, but the aim was to lift the most in several goes. Or something like that. Anyway, I tried to do the velodrome on a playground using those bikes, but I was six months too late and they'd all disappeared from sight. I think I used scooters or something in the end instead.
Top

Just taking the tangent even further: so a Helios fits in a Voyager's danglespaces, a regular tandem wouldn't, and also, I'm reliably informed, a LHT will not. Chain stays are too long.
Top

Bmblbzzz wrote:I think it looks fun but I'm not entirely sold on the point of it. It isn't foldable so won't fill that Brompton niche for commuters, at least not in the UK. Might be easier to take on planes and in cars, I guess. One point I'd watch is catching the rear mech when riding on rough surfaces or over grass.

I used to live on a narrowboat. My Twenty was really useful as it fit inside without needing a fold, and rode much like any other 3 speed. You had to be a bit careful on potholes, but it was a great bike and superb for carrying heavy things down a towpath.
I never found a minivelo at a price I'd be willing to risk without importing one from Aliexpress so I never pulled the trigger on one, but I could definitely see the point. Now I live in a house where you have to walk up a narrow path and steps. A bike that was 10" shorter than my current one would be great. So I'm watching this thread with interest.
Top
Post Reply
28 posts