For discussions about bikes and equipment.
Post Reply
11 posts • Page 1 of 1

No real point to this post, other than to say that I've just successfully replaced the cable drum on a Shimano RH ST-7900 STI lever. I broke it through stupidity that I shan't go into and on discovering that new units don't seem to be available and used ones cost a lot, decided to buy a 'for parts' lever and attempt to fix it.

It was... something of a nightmare, by far the fiddliest bit of bike maintenance I've ever done, although I could now do it much quicker, obviously. In the event that anyone else has to replace the guts of one of these in the future and finds this post, my tips are:

Use the Shimano guide to remove the lever. I bought the e-clip tools, but this part could probably be done with pliers.
https://si.shimano.com/pdfs/si/SI-6RT0A-004-ENG.PDF

There's a youtube video of a guy doing a 6700 shifter which helped me a bit, but it's not fantastic. Worth a watch though.
https://www.youtube.com/watch?v=wJj6dASBMN0

Unsurprisingly, reassembly is the hard part. Take clear, close up photos of exactly how the shifting guts should look before you start (like an idiot, I didn't) because it's possibly to have it all back together but wrong, so it doesn't actually function (no clicks). Ask me how I know...

I don't have the time to do a full description of the process but if anyone reading this ever needs help, reply to the thread and I'll try to assist!

FWIW I was inside the guts of a broken ST-6700 (which is laid out in a similar way to ST-7900 I think) only yesterday, and (to my eyes, anyway) it seemed easier to deal with than many older models of STI. In this generation of STI design the paddles and their pivots are entirely separate from the index mechanism itself, which means the index mechanism is inherently simplified. It is all relative though; still a very fiddly thing in absolute terms!

One thing I would mention is that in this generation of STI, dealing with a broken cable is an awful lot simpler than in older generations of STI. In fact I don't really think anything more than two small screwdrivers ought to be needed to extract the broken cable end. A #0 Phillips screwdriver to remove the access cover, and a small flat blade to prod the cable end out.

Further to the above I took this photo 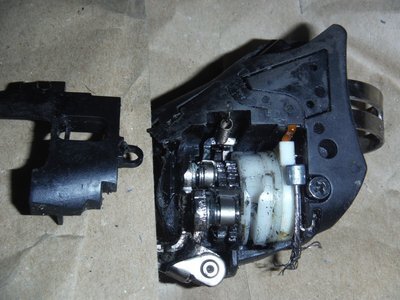 I've laid the extracted cable end just to the right of where it sat in the shifter. The cover is held on with a single screw which I've temporarily put back in its hole (just to the right of the broken cable). Once the shifter is set into a low gear position, a broken cable end can be simply removed by teasing the nipple end upwards out of its receptacle in the spool, eg using the end of a small flat blade screwdriver. To get access to allow the cover to be removed, the hood my be rolled forwards on the lever body.

I think this means that you have a fair chance of dealing with a broken cable on the road, using nothing more than a typical multitool. The Phillips bit on a many multitools often has a point on it that will engage well enough with the cover screw, which isn't ever that tight. The flat blade screwdriver on many multitools is narrow enough that it will pass through the cable slot to allow the nipple to be prodded. Small pliers (or hemostat) are not definitely required.

FWIW in the photograph you can see the pawls for upshifts and downshifts; these (amongst other things) latch with the index wheel and drive it round during shifting. The is another pawl on the far side of the mechanism, which pivots on a separate shaft that rums parallel to the index wheel shaft. Both shafts can be unscrewed and withdrawn from the rear of the mechanism, accessible once the shifter is removed from the handlebar. Note that in this design, the pawls can be inspected without taking anything apart; they are visible either via the window or through a small opening in the other side of the lever body.

This means that if a shifter isn't working properly, you can see nearly all the relevant parts without taking much apart, and this is usually good enough to allow the mechanism to be cleaned/lubricated, and to allow any damage to the mechanism to be seen. This is normally good enough to allow you to decide if the shifter is definitely broken, and whether it is worth trying to fix it or not.

BTW I feel I should comment that changing the cable is -provided it is not already frayed or broken- really every easy. It is not necessary to disturb the cover; the cable loads through a vertical port in the bottom of the shifter body, which is (as in MTB-type shifters) lined up with the port when the RH shifter is in high gear (cable full slack).

In fact I would go as far as to say that this generation of STI is a major improvement over the immediately preceding (first non-washing line ) sort. bearing in mind what it has to do, there are only a few things which I would criticise it for, being

a) cable bends; there are (as in all shifters using underbartape cable routing) more bends than in 'washing line' type STIs .
b) cable spool diameter; this is smaller than is ideal, and means that the cable will fail by fatigue (at the most used part as it wraps round the spool) as in the photo above. If the spool were twice the size, it would last almost twice as long.

I am pretty sure that the spool could be made larger even in the present size of housing, but that it isn't because the index mechanism itself would have to be engineered differently; getting the pawls to latch correctly becomes more and more difficult as the angle of spool rotation between index points gets smaller and smaller. To keep the same angle between shifts, keep the same shifter mechanism and use a larger spool diameter, the shift ratio would have to be changed too. Shimano MTB shifters -which us a larger spool size and a larger ratchet mechanism (and a different shift ratio in 10s and 11s to boot) are much easier to design and manufacture)

It occurs to me that if the index wheel in a 'road' STI could be made to rotate on a transverse shaft (i.e. parallel to the hub axles) then this would kill two birds with one stone; it would allow the spool to be a (much) larger diameter (similar to MTB shifters in fact) and it would allow a better cable run into the shifter, with at least one bend less. The penalty would be a more complicated linkage between the paddles and the index mechanism, or perhaps a reappraisal of the whole ergonomic setup of dropped bar shifters.

Cheers for your thoughts, Brucey. Reassembly was much easier second time around, the important thing was to know which parts to “skewer” on to the shaft in clusters and which to do individually. The orientation of the cable drum (highest gear position), ensuring that the pawls are ‘sprung’ against the ratchets and when to tension the two springs at either end (once everything is together, but before tightening the nut that secures the shaft) were the other key lessons!
Top

If working on older 10s STIs scores a '10' for awkwardness, this is still '8' or '9', so chapeau to you, counting double if you have not done this sort of thing before!

Yeah, I've not messed with intricate pawl-and-ratchet mechanisms before, I think I'll do an antique Swiss watch next.

Hi,
This is my very first post so here I go.
Last Saturday I lost the function of my Right Shimano ST-7900 shifter (down shift) but I was able to up shift normally. After examining the shifter and calling a couple of local bike shops I’ve come to the conclusion that a spring has broken within the main unit that appears to assist the shifter in resetting for the next down shift.
After watching a video I Removed the fastener and attempted to back out the main bolt that holds the internal gears but it seems to be a very tight fit or pressed in. I was able to remove part of the damaged spring but do I need to press the bolt out? Also, any recommendations on locating used parts?
Thanks
Dan
Top

Assuming you mean the bolt that 'skewers' that various parts of the gear mechanism, it should just push out, but may take a bit of effort. However, if you've managed to remove the broken spring you likely don't need to back the bolt out any further (have you moved it at all?), if you can get a new spring in?

I bought a broken shifter on eBay. I doubt they come up too often, so set up a saved search and get notifications when new listings appear.

That wasn't available (or at least I didn't find it) when I was doing mine, I didn't even know it existed as a spare part.

Further edit: A discussion with the seller of this should establish whether the part you need is intact?
https://www.ebay.co.uk/itm/Shimano-Dura ... SwDTdfWegZ
Top

I was able to remove the spring without backing out the bolt that holds the gears. Because it was located at the very front of the gear package I was lucky enough to easily unwind the broken spring over the front of the housing. I’m not sure if I have removed the spring completely so my next step is to back out the bolt. Applying hand pressure doesn’t seem to move the bolt. When it does move I’ll back the bolt out just enough to install a replacement spring.

Thanks for the links.
I was ready to jump on the one unit but they don’t ship to the USA so the other I sent a request for additional info.
Thanks again!
Dan
Top

I think I used an allan key to push the bolt through, but my memory is dodgy!
Top

I was able to tap the bolt loose and as I suspected the other end of the Broken spring was still present. The old piece was removed and after examining the bushing it looks like it has a fracture. This may be the reason for the broken spring as it rides next to the bushing.
Thanks for your help and patience. I’ll wait and see if a used or reasonable priced unit comes up on the market but I feel that this shifter has reached its end of life.