I eventually got to the point where on the rapto-bike I felt happy at nearly a 45 degree angle.

But it does feel odd to start with.
A shortcut has to be a challenge, otherwise it would just be the way. No situation is so dire that panic cannot make it worse.
There are two kinds of people in this world: those can extrapolate from incomplete data.
Top

At last! My SMGTE has arrived, a month later than hoped for.

After a few practice rides I can agree with all the advice received.

I'm getting the hang of things, pulling away from standstill is OK, but not on a steep incline (toppled over with a soft landing of nettles...).

Hill climbing is hard work, any decent slope and I'm into bottom gear struggling - I hope this improves with practice and as strength improves. I can only compare it to permanently climbing stairs!

It quite a thing to get used to 30mph (downhill) on a flying deckchair. Quite an intimidating experience. But Sooooo, comfortable, no aches or pains after the short rides (15miles or so).
Top

Glad to hear it. Which bars did you get?
Top

I've gone for underseat steering. I'd ridden a high bar 'bent before and didn't get on with that. The only negative is you do feel a tad exposed.
Top

yes I second the request for pics. They do feel odd, I went out on 'hilda, , my SMGTE yesterday morning , at 6.30am, first ride on anything in 3 weeks, and it was absolutely lovely. strange, but after nearly 2,000km on it, after a 3 week layoff, i found I wanted to recline the set a wee bit more, and it felt better.
Top

Took a chance on the rain clearing, and it did

. Another 18 miles and it's starting to get a it easier and making more sense.

It amazes me to get off after riding as fresh as when I started, no aches no pains - unlike my DF. 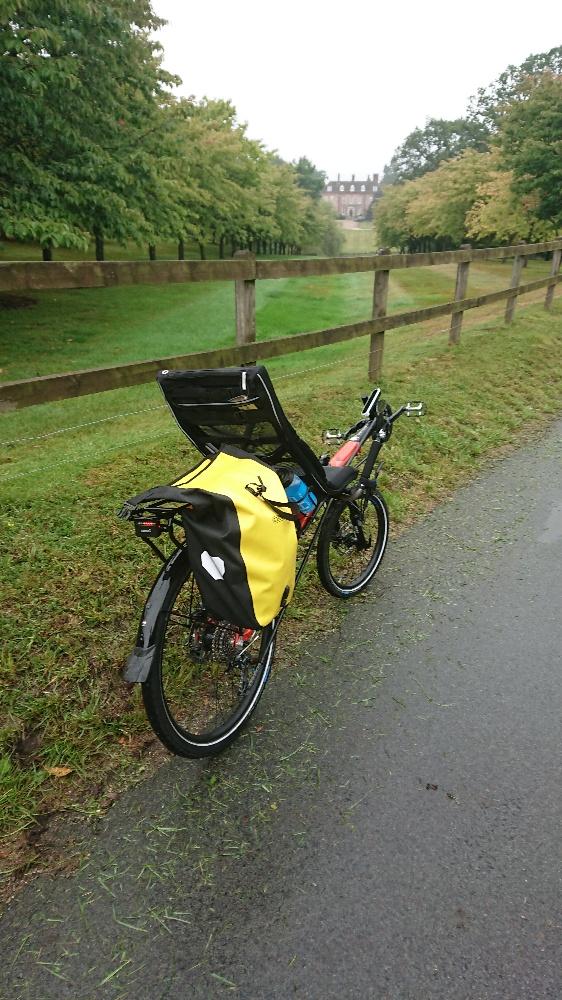 steve6854 wrote:
I'm getting the hang of things, pulling away from standstill is OK, but not on a steep incline (toppled over with a soft landing of nettles...).

Hill starts on a 'bent are like steering on a trike: there's nothing particularly hard except for habits you may have got in to on a "normal bike", and in this case it's often a tendency to pull on the bars. On an upwrong that's to help you push down on the pedal, but on a 'bent like the SMGT, which has much lighter steering than a typical upwrong, all that pulling hard on the bars achieves is have you veer off course.

The trick is minimal steering input, so try a very gentle grip on the bars (more of a rest than a grip, just a couple of fingers on each hand), and maybe try a gentle push on the bars. The point of that is simply to concentrate your mind on not pulling on them. And the usual advice, look at where you want to go, and not at what you're doing (if steering is going wrong you tend to look at the bars: it doesn't help!).

steve6854 wrote:Hill climbing is hard work, any decent slope and I'm into bottom gear struggling - I hope this improves with practice and as strength improves. I can only compare it to permanently climbing stairs!

There's no getting round the fact it's a heavy bike, but a lot of it is about getting your muscles used to a slightly different action. I've had mine for nearly 20 years but I still need to get used to climbing after I've had time off (I only use it for long leisure rides), but it does come and when it does you can chug up anything in the granny.

steve6854 wrote:It quite a thing to get used to 30mph (downhill) on a flying deckchair. Quite an intimidating experience. But Sooooo, comfortable, no aches or pains after the short rides (15miles or so).

It doesn't take long before you'll be happy with what an absolute monster descender it is. When I first got mine I took it on a "shakedown cruise" around Arran, and coming down the String road across the middle I was enjoying the fresh tarmac and going very fast. Came around a bend and... the fresh tarmac stopped and there was a pot-holed ruin ahead of me on a bend. I really thought I was doomed but the bike just cruised through it. So that was a lesson in the point of full suspension.
With the low centre of mass and no real danger of going over the bars, coupled with reasonably wide tyres and powerful brakes plus that suspension, you can really let it rip on the downhills. If I'm out with our local CTC group, which has quite a few riders who are fitter and more experienced than me and ride racing bikes, nobody can touch me down twisty downhills.
Often seen riding a bike around Dundee...
Top

steve6854 wrote:West Woodhay House in Hampshire if you're interested.

Erm: wikipedia reckons it's in West Berkshire but glad you're enjoying 'bent travel - the view is so much better. Just wait for those starlit night rides

I have to agree with other posters about overcoming difficulties with such simple things as starting off, especially on a hill. My LWB Linear has USS and a lot of the problem is getting the feel of the controls and where they are, especially the brakes if you need them in a hurry. I spent a lot of time just sitting on it, and moving stuff about until I was happy that I could reach the levers because you can't go looking for them when you suddenly need them.

Apart from the mechanics of starting off (making sure the coast is clear, being in a suitable gear, whichever foot you are comfortable starting off with with on its pedal just before 12 O'clock, light grip on the bars and just enough brake to hold the bike then push off and smoothly sweep the other foot onto its pedal) there is the psychological barrier. Even when I had got going the first time, It took a long time before I became confident in changing speed and direction, and dealing with unexpected events. I am getting a bit more confident now, but have still a way to go.

A few days later, after a few adjustments It took me 5 minutes of sitting on the bike to brace myself to start off again. I since have learnt not to overthink it, but to just do it. It's more a matter of muscle memory, as with an upright bike, and your body learns to react appropriately once you have been riding for a bit. I still find the steering very sensitive.

The comparison to riding a motor bike is helpful. You can pedal round corners and this helps to hold your line. When turning tightly, keeping pedalling with a gentle touch on the back brake helps to stop the bike falling inwards, at least on my LWB. A motor bike is most stable when accelerating and even applying a little power at low speed helps to improve control, and the same principle seems to apply to a recumbent.

When I first started a few weeks ago I found a worrying gap between being at a standstill and and about 4-5 mph when it began to feel stable. I found it very difficult to ride slowly without wobbling and wanting to put a foot down. Nothing wrong with the frame or steering bearings, it was just that my responses hadn't developed to be able to balance while leaning backwards. For me, it was a big issue. One of my great pleasures on a diamond frame bike is to pootle along at times, as well as ride slower cycle trails, and I thought I would not get on with this bike if it meant giving up this pleasure. However, I have ridden it about 200 miles now in various conditions and I can pretty much ride it to a standstill before having to put a foot down. It's still a l-o-n-g bike when it comes to manoevrability though.

I am getting better at starting uphill and dealing with difficult junctions now, and more of the things I do on it feel more natural than they did a few weeks ago.

So it's just a matter of practice, and getting some miles in. The confidence will just come naturally. I can echo the OP's view that it's a comfortable way to ride a bike. Also, random people will smile or talk to you, which may or may not be a bonus, depending on your point of view.
Top

How are you getting on with the SM GTE Steve? Do tell. Any decent pics and tales of adventure?
Top

I've done about 200 miles on the SMGTE, but not much in the past few weeks - I've been so busy! I'm planning on riding a "faux" commute during lock down, 10 - 15 miles at lunchtime.

Riding it has been great, leg strength improving, hills are not quite as daunting

I'm back on my Speedmachine for the winter. It is slower on the uphills than my summer bike (Bacchetta Strada) but better into winter headwinds and better equipped for the wet roads as it has full mudguards.

I'm once again reveling in the comfort - such a smooth ride - and the descending speeds! One extra advantage is that because I tend to hold the tiller bars in the centre, the more aerodynamic 'hamster' position is also much warmer

Finally, though I have fallen off a few times it has always been at low speed on slippy paths (leaves, mud or loose gravel on bends) with no damage to me as the bike's seat 'edging strip' takes all the punishment. I now have a reel of spare seat edging so the bike is still in good shape too.