Specific board for this popular undertaking.
Post Reply
19 posts

June (and so far early July) has not been kind to the North.

Just made me think that picking your month to do EtoE is a lottery.

From Leeds northwards is looking pretty grim today, and there is a weather warning for high winds as well.

Sympathy for anyone battling through it.
Top

Sympathy for anyone battling through it.

That's what we get for altering the balance of the elements making up the weather system. Ironically, if more folk cycled, we might not be in this situtation - conversely, it's us cyclists who suffer more obviously when fighting a head-wind. Whoever said life was fair?! Not me!!
(rides: Brompton nano & ever-changing Moultons)
Top

LittleGreyCat wrote:Just made me think that picking your month to do EtoE is a lottery.

Yes, for any tour not just an E2E. Not even the month, you could start a day before/after and have a different experience.
I did my JoGLE in May, some years ago, my riding partner had wanted to follow the convention and start at the other end, I persuaded him otherwise. The first day was OK, followed by two days of cold wet headwinds, the sort that have you pedaling downhill in bottom gear. We'd pretty much stopped talking.
Then in Inverness, we met a couple who had just abandoned their LEJoG having lost too much time battling the weather coming North along the Welsh border.
We had another day's rain, then a bit grey for a day, then almost as we crossed the England border, the sun came out and the second half couldn't have been more different and avoiding sunburn became the challenge.
All the records are held from the South, the team get to pick the day at short notice and beating the previous record with less favorable weather than that rider had is unlikely. None of that applies to the touring cyclist, even less so if they have the luxury in their timetable to be able to reschedule as they go.
I like this website for forecasts, though it's more for amusement rather than planning, here's this weeks forecast for a random mid Scotland location:
https://bigsalty.com/en/weather/forecast/331/
Top

I can't speak for north of Leeds today, but here in that city it's been bright sunshine most of the day but with a strong westerly wind. After wall-to-wall sunshine for several months (I've just had my biggest ever payout on the solar panels) it's been awful for most of the last couple of weeks.

I tried to make the point about the weather affecting End-to-End rides here:

Set off yesterday (Sun) for a short ride. Had only gone a couple of miles when a side gust nearly blew me to the centre of the road. Lucky no traffic. Gave up and returned home for the sake of staying safe. Had about 2 weeks of ‘Orrible weather here.
When the earth becomes sick the animals will begin to die. When that happens The Warriors of the Rainbow will come to save them.
Top

Wind is ridiculous here (east herts) .
Was out yesterday and came round a corner on a narrow lane to find a substantial tree newly across the whole road. It's been like this for the last 3 days.
Top

I was riding in the Helston area and down by the Lizard on Friday. Strong SW wind.
Sometimes it helped me, and when it should have been against me, I was sheltered by the bends in the lanes and the high Cornish banks.

Mick F wrote:I was riding in the Helston area and down by the Lizard on Friday. Strong SW wind.
Sometimes it helped me, and when it should have been against me, I was sheltered by the bends in the lanes and the high Cornish banks.

I was lucky, thank goodness.

Did you bag all your churches?
I’ve missed the high winds of the last few days. Been off the bike with a tummy bug - might have crossed paths if I wasn’t.

Winter had arrived in the land of Kernow. Along with it came wet roads and cool winds.
“Oh, my wheels and coupling rods!” Peetee exclaimed.
Top

Yes but no.
Should have done all eleven, but because I wan't concentrating, I went through Mullion without actually eyeballing the parish church.
In my defence, the church isn't where the OS map shows it.

I went down a week later and bagged more Cornish roads - as it's my long-term desire to ride all the Cornish roads.
Did 43miles including Mullion parish church .......... so yes, I bagged them all.

Still have fourteen left to do from Penzance and west.

peetee wrote:I’ve missed the high winds of the last few days. Been off the bike with a tummy bug - might have crossed paths if I wasn’t.

Poor you.
Hope you're better soon.

Its always been a lottery really. Recent trend seems to be towards good May and September and a largely washout summer!
Top

Same here! Thing I can't understand is why the forecasts differ so far from reality. Both the Met Office & BBC forecast in my area for today, were virtually non existent winds of 6mph (NB. Same forecast for tomorrow).

Have to admit that in the initial 40 miles battling into this non existent wind today, I couldn't help putting my struggle down to post lockdown fitness loss.

Until I headed home and found myself hitting 39.9mph on one stretch, having not even turned the pedals in the previous two miles! Fair enough, there's a gradual descent on this stretch that'll result in my hitting perhaps 20mph with little effort (NB. I ride this stretch as a matter of return). But an extra 19.9mph fueled by a 6mph wind. Unlikely
Top

Upgraded my weather display to Fahrenheit, it shows nearly 100+ °, seems much more than Centigrade, frightening, best to stay at home 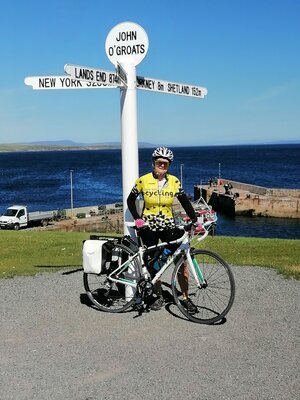 Here's my partner at JOG on Sunday when it was cracking the paving.

NB And look at those tidy little panniers - and she even had a dress and sandals for hotel dining rooms in there!
ENIGMA DICK aka Richard Barrett
Top

Stay safe out there - it is seriously not nice at the moment.
Top

The weather is getting better, trees are starting to shed their leaves, and the sun is noticeably lower

The mercury should dip below 10° C soon
Entertainer, juvenile, curmudgeon, PoB, 30120
Cycling-of course, but it is far better on a Gillott
We love safety cameras, we hate bullies
Top
Post Reply
19 posts