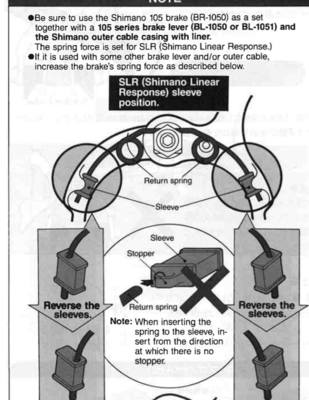 * lined cable housing, which was called SLR housing, and was a key part of the system
* return spring in the levers, hence if you didn't have matching 105 levers you were instructed to increase the caliper spring tension
* single pivot calipers, as with previous (non-SLR) brakes

So the biggest change was in the levers, the brakes themselves were similar to previous models.

The Super SLR followed in 1990 for Dura-Ace 7403, along with the first STIs. These are dual pivot, and so the lever mechanism was also different. AFAICT there were never any non-Super STIs.

At one point Shimano listed separately 'compatibility' and 'spec'. The Sora/Claris 3400/3300/2300/2200 and the current A070 (Tourney) brifters were NOT Super SLR 'spec', but they use Super SLR calipers. Tiagra 4400 was Super SLR spec but 4500 was not. This appears to be related to simpler construction in the 4500 vs 4400 https://si.shimano.com/api/publish/stor ... -2609A.pdf https://si.shimano.com/api/publish/stor ... 0-1885.pdf Super SLR was a marketing term describing not merely 'dual pivot' brakes, but also some element of the lever construction, such as the use of bushings or whatever.

I.e. the braking was the same, but the cheaper levers were, well, cheap. Shimano seems to have dropped this distinction at some point and now calls A070 'Super SLR'.

New Super SLR is explained on the current website:

"SLR stands for SHIMANO Linear Response. The NEW SUPER SLR design makes use of a friction-reducing mechanism in the caliper, lever and cable that improve response and modulation.
Also for the lever, the SERVOWAVE mechanism is adopted to provide quick contact of shoe to rim and longer stroke from the initial braking effect for better control."

So the, er, Linear response, is not linear any more, rather the cable pull is increased in the start of the stroke, in a similar manner to their more expensive hydraulic systems.

The increased cable pull of New Super SLR levers means LESS braking force when used with a Super SLR brake caliper (which Shimano says is ok). When reversed, the opposite is true, but Shimano prohibits that combination, on the basis that the levers might end up hitting the bars before the caliper is fully 'on', so the brakes don't stop effectively.

This refers to the addition of a roller pivot to the brake caliper, so the arms are symmetrical so that the main pivots are both short, instead of one short and one long: 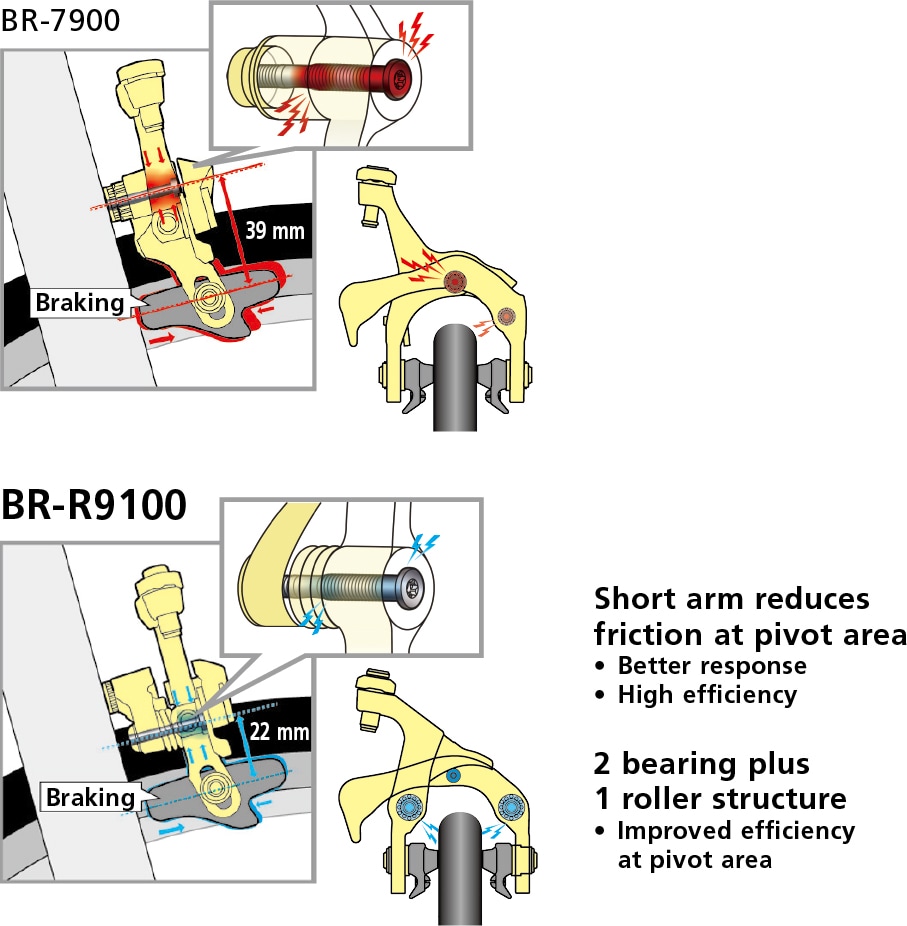 An integral part of the SLR EV system was the cable:

"The Dura Ace 9000 shift housing is the same as SP41 (actually it is SP41), but the brake housing is completely different and MUST be used with the new polymer coated brake cable. Unlike standard SP41 housing, the new BC-9000 brake housing comes pre-lubed with special polymer compatible grease."

The BC-9000, BC-R680 and BC-1051 cables appear to be identical. Shimano claimed 20% extra braking performance from this, or something like this.

The Tiagra 4700 shifters are described by Shimano as 'SLR EV'. This appear to relate to the geometry of the levers, which is revised compared to the 'New Super SLR' era, and hence identical to the 9000/6800 brifters. It also might relate to the supplied cabling:

The full SLR EV blurb is

"SLR-EV is SLR with a dual symmetric pivot brake caliper. The short-arm brake design employs two bearings and a roller to realize greater efficiency in the pivot area and deliver superior modulation and power for braking. Together with the BC-9000 brake cable, the latest calipers deliver 36% more braking power than SHIMANO’s previous brake model. "

So it's an actually improved brake caliper, plus some grease.

It's a bit odd that the 'SLR EV' Tiagra 4700 shifters are accompanied with 'New Super SLR' 4700 brake calipers. But there you go, you can fit 105 brakes, cables and housing to your Claris brifters and it will work pefectly. Which saves several hundred pounds, but I suppose that wasn't really Shimano's intention.

You can also have a 'SLR EV' brake caliper with a 'New Super SLR' brake lever; I have a bike with 5700 brifters, which pre-date the 9000 groupset, so are 'New Super SLR', but because the bike has 5710 direct mount brakes, released as an update the same year as 9000, those brakes follow the 'SLR EV' design. And the system would I think be fully 'SLR EV' if I would replace the cable and housing (even if the cable moves slightly differently in 'SLR EV', there's no guarantee that they won't change that for the next Dura-Ace yet still call it 'Dura-Ace')
Last edited by thelawnet on 12 Oct 2020, 6:58pm, edited 2 times in total.
Top

gives launch dates of shimano groupsets, so is useful for quickly discriminating between b) and c) type brake systems

To the above I'd add the following comments:

Needless to say matched sets of brake calipers and levers give the best performance, but b) type levers work reasonably well with a) type calipers, a) type levers work non-ideally with type b) calipers (high power but must use much reduced running clearance) and any combination of c) and d) will work reasonably well. Obviously caliper brake MA varies with where the brake blocks are in the slots; high = high caliper MA, low = low caliper MA.

Of particular relevance to most UK cyclists (with mudguard clearances) is that Shimano recommend c)/d) type levers with deeper drop (47-57mm) BR-R650 /BR-R450/BR-R451 calipers (which are b) type) but say that setup gives 'reduced power' (dotted line on compatibility chart). This is certainly the case if you need these calipers (i.e. you need a brake drop between 52 and 57mm). Shimano don't bother making a decent brake caliper with more than ~52mm brake drop which works correctly with any new model lever/STI they have launched since 2008 (not 2300).

The original SLR single-pivot calipers (like BR-6400) also have a ball bearing between the arms, which makes a big difference to friction and their tendency to stay centred. They are extremely effective brakes with the correct levers, with good power and feel. They don't work well with current levers, which pull too much cable for them.
Top

gives launch dates of shimano groupsets, so is useful for quickly discriminating between b) and c) type brake systems

The Allgemeiner Deutscher Fahrrad-Club used to keep much better track of such things;

This site doesn't seem to have been maintained after 2008, which is unfortunate, perhaps the Germans have also switched to political campaigning rather than worrying about mechanical advantage and such like.

rogerzilla wrote:The original SLR single-pivot calipers (like BR-6400) also have a ball bearing between the arms, which makes a big difference to friction and their tendency to stay centred. They are extremely effective brakes with the correct levers, with good power and feel. They don't work well with current levers, which pull too much cable for them.

There were some models using thrust washers/bushings:

Best I can tell all of these SLR EV use ball bearings in each pivot, and differ only in finish.

The 4700 Tiagra release should have got SLR EV brakes, but they decided to give it bearing (105-spec) New Super SLR brakes instead.

The existence of the 'Super SLR' Tourney A070 brifters in the line-up, presumably is why they keep a 57mm-reach 'Super SLR' brake in their line-up.

I suppose it doesn't make a lot of sense to update Tourney to something more modern in that manufacturers of cheap road bikes might be grateful for the deep-drop brakes, but if they updated to 'New Super SLR'/'SLR EV' pull ratio, they'd only have 51mm calipers to work with.
Last edited by thelawnet on 12 Oct 2020, 6:57pm, edited 1 time in total.
Top

The BR-R450 appears to be discontinued. The BR-R451 remains widely available. But what’s the difference between the two?

The BR-R650 is increasingly hard to find. I fear it’s on the way out, but maybe someone knows for sure.
Top

Samuel D wrote:The BR-R450 appears to be discontinued. The BR-R451 remains widely available. But what’s the difference between the two?.

part #4 (locknut at the rear of the caliper) is different, being B compatible; it is the only part of BR-R451 which is not 'A' compatible with BR-R450

so the answer is 'virtually nothing'.

I have Microsoft r80 levers on my winter bike with be r451 calipers is the a good or bad combination. Just came off Ikley moor this morning and my hands were suffering tbh!

dunno; I suggest double- checking the brake lever MA/cable pull. On a long descent it is quite normal to get tired hands, even with brakes that are working nicely.

Brucey wrote:part #4 (locknut at the rear of the caliper) is different, being B compatible; it is the only part of BR-R451 which is not 'A' compatible with BR-R450

What about the calliper arms themselves? Shimano shouldn’t have changed the various lever lengths, since the hand-lever compatibility didn’t change, but might there be some other subtle change – stiffness or something? I still haven’t seen a BR-R451 in the wild.
Top 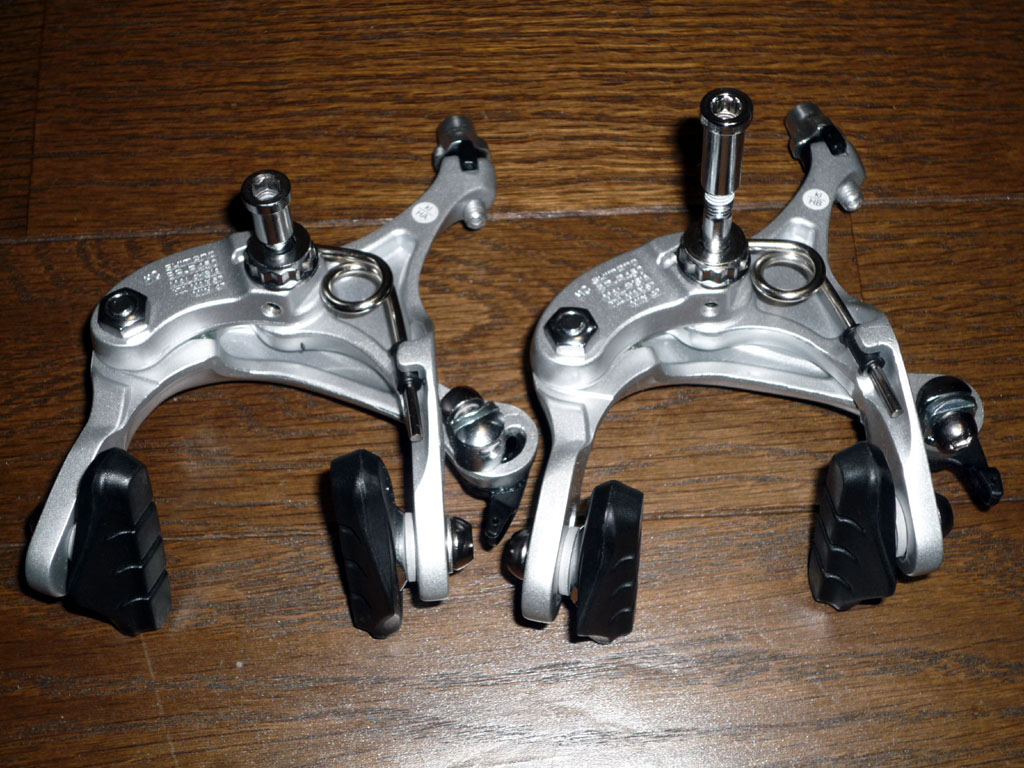 apart from the nut, they look very similar to me

The BR-R450 appears to be discontinued. The BR-R451 remains widely available. But what’s the difference between the two?

The BR-R650 is increasingly hard to find. I fear it’s on the way out, but maybe someone knows for sure.

R650 is not a current product. 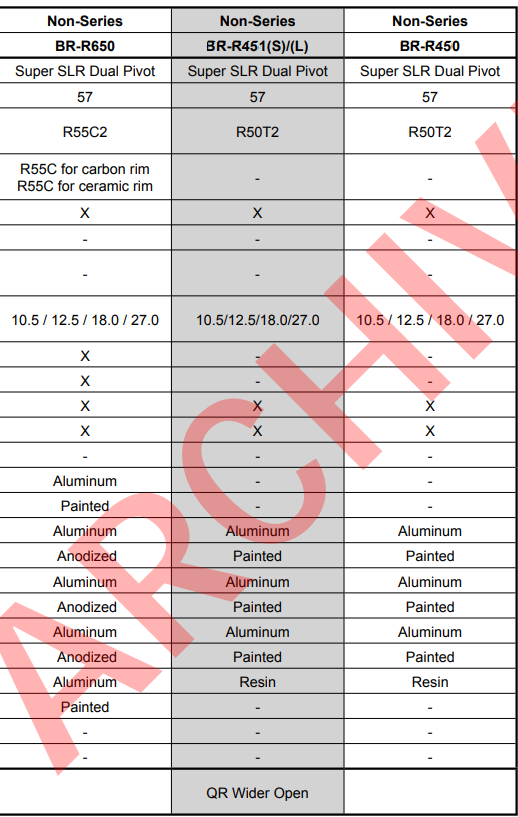 I used a pair of hollowed out SRAM shifters (10 speed Force IIRC) that only had the shell and the carbon brake lever with no spring or anything in it, basically like the levers of old that would flop down without a cable. I used these as part of a lightweight set up on my Raleigh titanium (with DT shifters) and they worked really well with both 6700 and 6800 calipers. I've been using BR9000 for a few years now and they're great but it's still mostly down to set up and the amount of traction your tyres have (for whatever weather conditions prevail) plus brake pad compound.

A lot of advancement like most things are to induce people to spend more and make people believe they are getting something better than before, sometimes that might actually be the case.
I might set up some 6207 calipers with a set of 5800 STIs and see what happens when I put Swiss Stop blue pads in and throw on a set of the alloy rims, I expect it won't make a huge amount of difference to the latest and greatest.
Top

There are a few other pieces to the puzzle: 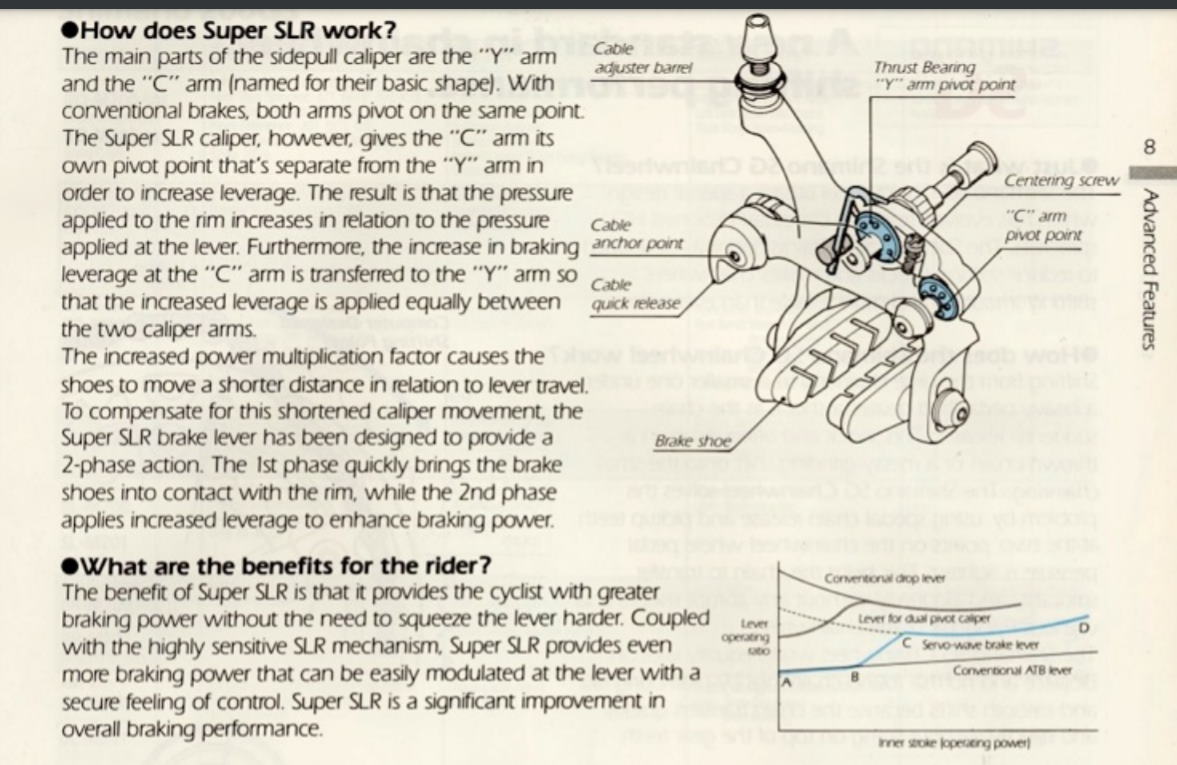 It notes the dual pivots and the 'servo-wave' bringing the pads together more quickly early in the stroke: 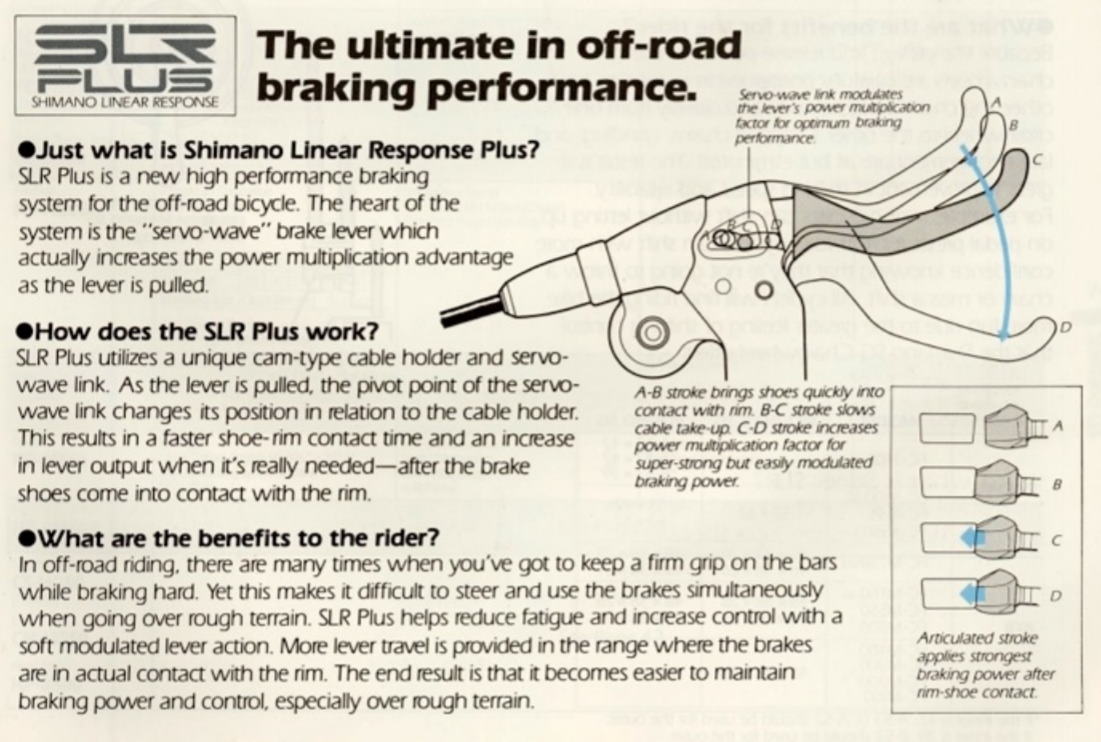 It seems 'SLR' MTB brakes didn't last long, but they kept the 'servo-wave' jargon to describe their v-brake levers when they were launched.


With regard to 'New Super SLR', this doesn't seem to have been a brand per se. Rather, Shimano with the release of Dura-Ace 7900 set out to lay waste to everything that went before,

'New Super SLR' appears in their spec tables first only 3 years later, though Ultegra 6700 was sold with

"New Super SLR Design relocates the brake lever pivot for better mechanical advantage. Synchronized with the new brake arch pivot a greater level of modulation and power are available from the tops of the brake hoods, where most people ride a majority of the time. "

So this really was a shoddy piece of marketing; they could have called it 'Super-Duper SLR' or something, but instead they just broke things and didn't even bother to give it a catchy new name in doing so.
Top

aha! That makes more sense than a whole new caliper model number just for a different locknut! Yes, I think you can even see that the pinch bolt assy might swing further on the photos of the back of the calipers. I guess BR-R450 mayn't open wide enough to let a 32mm tyre out when it is mounted on a narrow rim...?