Folding bikes are a pretty good indication of what is wrong with our public transport system. Commuters who are lucky enough to be able to get on a train and then walk a few streets to their house/office often resent folding bikes.

Bikes and public transport are all part of an integrated alternative to the car and the train companies should stop wasting so much space on trains with coffee bars and other nonsense and get the basics correct, I can carry a flask if I want coffee!

If train companies had a bike carriage like they do in Germany then people could use a full size bike.
Top

I have a Dahon Speed 7. Extremely pleased with it - especially how good the gearing is. It's not the lightest in the world but it was £200 new on EBAY and has proved really useful.
Top

I must disagree! I have several times done day rides of 100 mile or more on my Brompton 6 speed: it seems to take about 30 mins longer than on the touring bike but always took less than 10 hours, including stops, the fastest being 100 miles exactly in 8h15, including three major climbs from Cernay to the Jura and back during the 2004 semaine federale week.

The most I ever cycle on the Brommie is from the town centre (B'ham) home, which is about 7 and a half miles. Yup, it's possible, it's just not quite as comfortable as my other bikes.

There is an online journal of someone who did an e2e on a brommie cycling an average of 80 miles a day for a couple of weeks.

Distances are possible, I'd just do them on one of my other bikes >;o)

Ivor Tingting wrote:Bromptons are not only the quickest and most compact folder but the safest in that they do not have chainsets sticking out ready to snag on anyone who is passing unlike many other folders I tried and now see as they literally fold in half. Rather impractical really. The design is genius, but that is why they are more expensive and Brompton is very successful. I have never not been able to find space on a train in a luggage rack for it. Why would you want carry it a long distance? You would either ride or wheel it, they are so quick to assemble/dismantle. For the OP you need to try as many folders as you can B4 u buy including a Brompton. You can get only so much advice from a forum. Whatever you choose you will have to be comfortable with it.

It might be a struggle to find a good 2nd hand Brompton. I looked for 2 years, couldn't find one, so bought one new in the end. On reflection I should have bought one new straight away they are so good. Don't be put off by comments about the handling. It's fine. If you're a competent cyclist with reasonable experience you will be fine. BTW if you find a 2nd hand one first be very suspcious of it's provenance and the seller's reasons for selling as they tend to be kept for a very long time. I would never sell mine. Going shopping I just stick it in the supermarket trolley. You couldn't do that with any other folder.

Don't bother with Brompton Dynamo or rear rack they only add more weight. You can't use panniers on the rear rack anyway as it is so low and you have to keep removing them if you fold it just in the upright position as the rear wheel rack goes under the middle of the bike. All you need is the front bag which mounts on a block positioned above the brake caliper. Don't bother with Dyno or hub lights which all add to weight. You can buy decent lights that last ages very cheaply now. You might need a telescopic seat extension depending on your height inside leg measurement which is extra, but don't lose sight of the bigger picture these are excellent little bikes. Go for the Kelar tyres as well. Ditch the folding pedal as well and put a pair of SPds on. It will only stick out a little more than the folding pedal. Obviously they are not as capable as a full touring bike but they are still pretty good. There won't be many places you won't be able to go. But then you might reach other places a tourer couldn't get you to.

The rack is an absolute must for me. It's how I get my chinese takeaway home!

I agree that the rack is essential, whether carrying a load for recycling at the tip or going camping 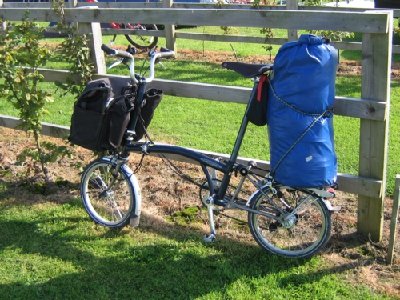 At Bletchingdon for the BWC 2008

I searched for ages and tried all sorts of bikes and finally settled on the Dahon Jetstream (not the XP) as I wanted to cycle on paths that are a little rougher, but wanted a bit of comfort and it was less creaky than the Birdys I tried, I don't care about brands. To be honest it feels like my Moulton, but folds. It's of average size and fits in my car easily. The suspension isnt spongy at all but very hard, unlike a mountain bike. Great fun and you can do lots of adaptions easily. I use a seat post rack. I'm 6 2"

MLJ, what a great photo. Any idea what the weight of the load you are carrying is? Also, how heavy are you. A friend has a Mezzo folder and the total weight it is designed to carry is only around 15.5 st. From what I've read on this post the Brompton appears to be best load-carrier in it's class as well as the best folder.
Top

MLJ wrote:I agree that the rack is essential, whether carrying a load for recycling at the tip or going camping

My takeaway usualy takes up a good deal less space.

gilesjuk wrote:Bikes and public transport are all part of an integrated alternative to the car and the train companies should stop wasting so much space on trains with coffee bars and other nonsense and get the basics correct, I can carry a flask if I want coffee!

The packed commuter trains in the south-east don't have coffee bars. The whole train is seats. Trains that do routes within Greater London don't even have first class seating, that's only for longer distances (e.g. to Reading, Brighton etc).
(Also, they must make a lot of money from restaurant cars on intercity trains, otherwise they wouldn't staff them all the time.)

If train companies had a bike carriage like they do in Germany then people could use a full size bike.

If the commuter trains in the south east had a bike carriage there'd be a big reduction in service: the train would have to wait in the station for longer for people to stow/retrieve their bikes. Lots of routes run trains as long as the platforms will allow (and short platforms are being lengthened where needed) so on these trains there'd be one less carriage for people.

In my experience, there's almost always room for a full-sized bike on a train within the south-east at off-peak times. Mostly because the service is very regular (better than Germany, in fact, although more expensive).
At peak times, it's unreasonable to expect to take a bike on an at-capacity service. Maybe they could sell bike tickets for the cost of 6+ person tickets, as that's about the space they take up

I don't often use long distance trains, or trains outside the south-east; I'd be surprised if the situation isn't different in other areas.


Has anyone got a cheap folding bike ? (Folding BSO?) Something like this:

I thought about getting one for occasional use when I wouldn't want to have to lock a full-size bike somewhere. I haven't yet, I don't think I'd use it enough.
Top
Post Reply
55 posts