DIscuss anything relating to non-standard cycles and their equipment.
Post Reply
21 posts 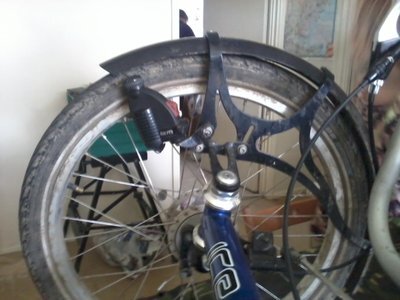 Struggling as I have been to find a dynamo solution for my trike, I finally gave up with hub dymanos and brought a cheap secondhand B+M 6 from ebay to experiment with.

I really didn't like the idea of pushing the no turn screw into my frame as my rear triangle is pre mounting boss, so was looking other mounting ideas.

I think I have found one, but before I go ahead and wire it up please tell me what obvious reason there is why its not done this way. I'm sure I have missed something.

I can see it will be noiseier and that it doesn't line up perfectly but other than that it seems to turn fine and will be easy to turn on and off I.e. for the occasional tunnel or phone is fully charged. plus two (one for lights the other for charging) is a possibility. 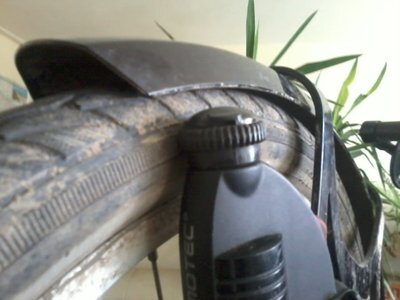 Constant pulling to one side due to the drag?

I tend to favour mounting bottle dynamos in a trailing position in relationship to mudguard and rack stays. It is not a major problem if you dont, but it is the fail-safe location if you ride in locations where road debris is a possibility.
Top

My mind had drifted along this path too, Eddie. But I've not done anything about it because, since retiring and getting my trike, I don't do many miles at night, and my battery lights serve me well. However, here are my thoughts, based on nothing more than my ageing grey matter.

1. As you predict, I think it will be noisier. My mudguards "chatter" anyway, despite being properly tightened.
2. The mounted on the mudguard stay ( even quite near to the kingpin bearing) might also "chatter", or be flexible. This could show up in variable pressure between tyre and roller, and subsequent slippage.
3. The added weight of the dynamo, with the vibration, might lead to fatigue cracks in the mudguard stay. It's a composite (not sure whether it's carbon fibre) and may take it. I don't know it's strength, or it's characteristics. But, it's not ductile. It might fracture.
4. I don't know if a bottle dynamo designed for a 700c/559 tyre can cope with the significantly increased rim speed of a 406 tyre. Not only is there a proportional increase due to the geometry, but I'm sure (no.... I know) I descend significantly faster (about 20%) on my trike than I ever did on my conventional upright. I genuinely don't know on this because I don't have much of an electrical background, and definitely not an understanding of any electronic circuitry that might manage such a range.
5. The bottle is vulnerable to being kicked as you get on, or off. A minor point.
6. In the rain, where does the spray from a 406 wheel go, and where is the dynamo relative to it (as compared to a bottle dynamo on a big wheel)? Probably no different.

On the positive side, I think it's a great idea and will be interested to see how it turns out. The ability to charge a phone, have two dynamos and to disengage them when not need is good news. Of course, these can be achieved off the shelf.......but not a the cost of this possible solution,
Top

Thanks for the feedback.

If you mean pulling to one side being anti clockwise then I think it will be okay as the bracket is snug against the mudguard bolt holding it fast.

Trailing sounds a sensible plus point.

The mudguard stays on these old models are steel. I have not had any chatter yet but agree that the extra weight may well produce this.

Yes, I'm guessing they are designed around larger wheels fortunately not so much that they don't align well but that may pose a problem. I am though a slow rider most of the time, generally fully loaded. I am planning to run two front lights from one so that should soak up any spare.

By that part of the tyre its mostly just water at the center and flying out the top of the mudguard if I remember correctly.
Top

Please excuse brevity, missing punctuation and broken posts. I can't scroll down on my phone and even worse mine is out of internet so I'm using my wifes with an ity bity screen and even smaller key pad.
Top

I don't know if a bottle dynamo designed for a 700c/559 tyre can cope with the significantly increased rim speed of a 406 tyre. Not only is there a proportional increase due to the geometry,

The wheel may be spinning at more RPM but the rim speed will still match the road speed, it must as they are almost touching. A bottle dynamo will be affected by the height (as in 28mm or 35mm) of the tyre but not the size of the wheel.
If it suffers from you just going too fast that isnt due to wheel size.

The reverse of the case where a hub dynamo will be running above predicted RPMs if designed for large wheels.
Top

eddiewalkling wrote:If you mean pulling to one side being anti clockwise then I think it will be okay as the bracket is snug against the mudguard bolt holding it fast.

I meant more drag on the right wheel, than the left wheel thus trying to turn right all the time, and you having to steer left to compensate, like having one brake dragging.

Of course Notme2 and Beardy are quite right in pointing out my schoolboy howler. I'll write out, 100 times in my best handwriting, "Contact patch speed relative to the road is the same for the all trikes travelling at equal speeds."

Make sure you line up the axle of the dynamo with the wheel axle.
A shortcut has to be a challenge, otherwise it would just be the way. No situation is so dire that panic cannot make it worse.
There are two kinds of people in this world: those can extrapolate from incomplete data.
Top

I Found a photo in the Icletta catalogue which shows a B+M dynamo on the rear wheel of an ice trike mounted just above the inspired cycle engineering label in a slotted hole. just checked my own ICE Sprint and its where it says Compact Flat Twist CFT.

As your experimenting not sure if you've already tried it

I think it's basically OK but line the axles up like Bob says, else you'll wear out tyres and caps quicker than necessary.
MJR, mostly pedalling 3-speed roadsters. KL+West Norfolk BUG incl social easy rides http://www.klwnbug.co.uk
All the above is CC-By-SA and no other implied copyright license to Cycle magazine.
Top

Having used a dynamo on a rear suspension ICE S with the curved mono stay. Due to the width of the rear forks the dynamo wasn't at a very good angle, this caused a lot of cap wear on the top edge. I even tried putting washers in to get it closer to the wheel to get a better angle.

My Ice 2012 suspension mudguard mounts are alloy, are these different? Looks welded to me. The bit around the actual guard looks the same. A creative mounting solution though might be a bit strange with a sprung wheel.

I made a Z-section bracket for the rear arm to line the Nordlicht up to my satisfaction and tuck it well in.
Built f' comfort.
Top
Post Reply
21 posts